ANAHEIM, CALIF. - Disney announced a line-up of new attractions and entertainment coming to its theme parks around the world during the D23 EXPO 2015 in Anaheim, California. Star Wars Launch Bay Coming to Disneyland Resort and Walt Disney World Resort - This interactive experience will take guests into the upcoming film, Star Wars: The Force Awakens, with special exhibits and peeks behind the scenes, including opportunities to visit with new and favorite Star Wars characters, special merchandise and food offerings. Star Wars Launch Bay will be located in the Animation Courtyard at Disney's Hollywood Studios and in Tomorrowland at Disneyland park (Disney Parks)

Walt Disney Parks and Resorts Chairman Bob Chapek gave 7,500 lucky fans a behind-the-scenes look at what's to come. He was joined by Imagineers working on these projects as well as legendary filmmakers James Cameron and Jon Landau who shared new details about Pandora – The World of AVATAR including the names of the land and E-ticket attraction – AVATAR Flight of Passage. Fans also got a chance to see Marvel legend Stan Lee in a cameo appearance where he posed as an unsuspecting fan during Iron Man's dramatic entrance. 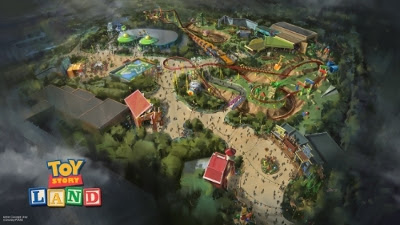 Among the many announcements Chapek shared were new and enhanced Star Wars experiences coming later this year to the Florida and California theme parks, plans for a new Toy Story Land at Disney's Hollywood Studios, and more details on Pandora-The World of AVATAR, which is already under construction at Disney's Animal Kingdom. Chapek also shared that Soarin' Around the World will make its U.S. film debut at Epcot and Disney California Adventure taking guests to new places around the world. Additionally, fans got a preview of exclusive video of the first Marvel attraction planned for Disney parks, coming to Hong Kong Disneyland in 2016.

"From Disneyland's 60th anniversary celebration to the anticipation of Shanghai Disney Resort, we're in the midst of unprecedented growth and expansion around the globe," said Chapek. "With these new announcements, we continue our legacy in creating innovative attractions, worldwide entertainment, and magical lands that take our guests into the worlds of stories they love." 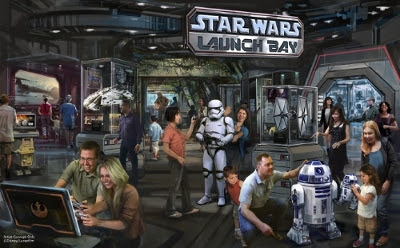 In addition to these announcements, Chapek talked about the exciting news announced earlier in the day by Chairman and CEO of The Walt Disney Company Bob Iger for plans to bring Star Wars-themed lands to Disney's Hollywood Studios in Orlando and Disneyland park in Anaheim. Each 14-acre land will transport guests to a never-before-seen planet with two signature attractions, including a customized secret mission on the Millennium Falcon and an epic Star Wars adventure that puts guests in the middle of a climactic battle.

Details on each of the projects include:

Star Wars Enhancements & New Experiences
From a new Star Tours adventure to Star Wars Launch Bay, from a new Jedi Training Academy to "Season of the Force," soon guests will be part of both new and enhanced experiences at Walt Disney World Resort and Disneyland Resort.
Toy Story Land at Disney's Hollywood Studios in Florida
The reimagining of Disney's Hollywood Studios will take guests to infinity and beyond, allowing them to step into the worlds of their favorite films, starting with Toy Story Land. This new 11-acre land will transport guests into the adventurous outdoors of Andy's backyard. Guests will think they've been shrunk to the size of Woody and Buzz as they are surrounded by oversized toys that Andy has assembled using his vivid imagination.  Using toys like building blocks, plastic buckets and shovels, and game board pieces, Andy has designed the perfect setting for this land, which will include two new attractions for any Disney park and one expanded favorite.
After Dark at Disney's Animal Kingdom and Pandora – The World of AVATAR
As part of the largest expansion in the park's history, Disney's Animal Kingdom will immerse guests into the world of Pandora, and the entire park will transform after dark with new nighttime entertainment experiences, offering guests longer days than ever before to experience this one-of-a-kind theme park.
Soarin' Around the World in Florida and California
Next year, guests at Epcot in Florida and Disney California Adventure in California will journey to far-flung lands and fly above some of the world's most unique natural landscapes and man-made wonders when the new Soarin' Around the World makes its U.S. debut.

Iron Man Unveiled for Hong Kong Disneyland
Iron Man landed at D23 EXPO today for a special appearance, and soon Hong Kong Disneyland guests will have the opportunity to meet and take photos with the Super Hero himself. Set to open in 2016, Iron Man Experience will be the first Marvel attraction at any Disney park, taking guests on an epic adventure over the streets and in the sky above Hong Kong.  The adventure will begin at the new Stark Expo where guests board the Iron Wing to take flight and battle Hydra alongside fan-favorite Avenger, Iron Man.