Will Brexit affect the hotel bookings for Spanish chains?

Affilired have worked on a report comparing Eearly booking period pre and post Brexit as an indicator of what's to come regarding Britons' direct booking in Spain.

2019 was a year, first marred by the shadow of Brexit and then by the fall of Thomas Cook in late September; the uncertainty about the possible consequences of both events have shaken the tourism industry.

According to data from the National Institute of Statistics, 2019 was a record year for Spain,  with 83.7 million international visitors.  Despite this overall growth, there was a slight drop of 2% in  tourist numbers from the UK, Spain's main source of tourists.  But yet, according to the INE, until October 2019, of all of the foreign tourists who stayed  in Spanish hotels  the largest group were British, accounting for 26.1% of all overnight stays.

Although it is early days to  draw any conclusions about what will happen in 2020, Affilired has analysed how this development could affect the direct bookings for Spanish hotels. Affilired  looked at the trends in the British market when comes to booking  holidays directly in 2019 and the first month of 2020.*

Countries with the highest number of direct bookings made by British tourists in 2019.
In spite of the slight decrease in tourist numbers from the United Kingdom, Spain remains the country with the most direct hotel bookings, surpassing the previous year  by 2.74%. (2018)

Spanish regions which have most benefited from the British market bookings.
In 2019, the Balearic Islands led the direct hotel bookings made by British tourists with 44%, the hot spots were Palmanova, Alcudia and Puerto Pollensa.  The second region was the Canary Islands with 35%,  Playa de las Americas, Corralejo and Maspalomas being among the most popular destinations. 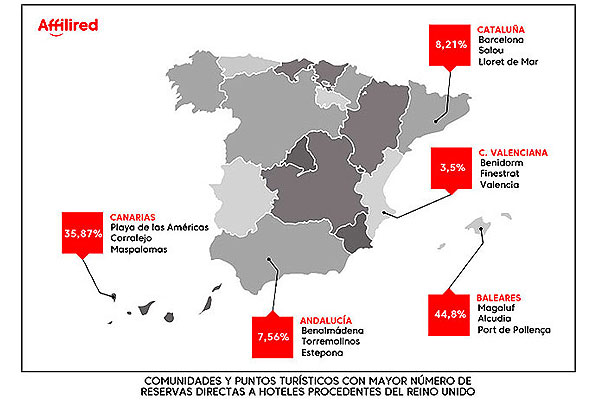 Many of the direct bookings are made during the month of January, known to the hotel sector as the "Early Booking".  A period when tourists take advantage of the  offers available  to book the holidays they will enjoy during Easter, Summer, etc;  early booking is especially popular in the United Kingdom.

During the Early Booking campaign, the number of direct hotel bookings increased by 25% more than the annual average, being 47,2% from the United Kingdom.

When comparing the data of the direct bookings made in January 2019 and January 2020, slight changes were detected such as a decrease of 1.3% of the British bookings in Spain.

This drop particularly affected the Canary Islands and Valencian region. On the other hand, the Balearic Islands, Andalusia and Catalonia, have seen their direct bookings increase.
* Title: Direct hotel bookings made by British tourists during Early Booking. 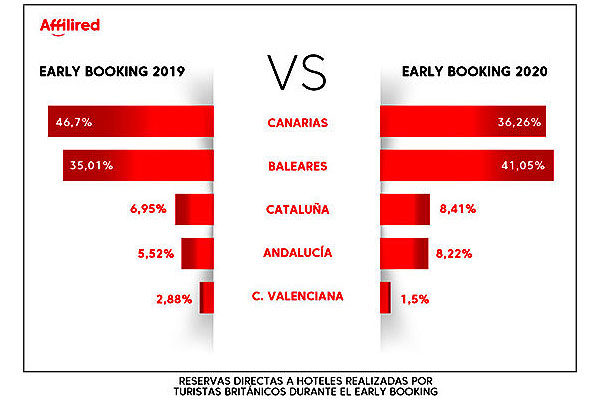 However, according to a report published by the European Travel Commission, the number of British tourists is expected to fall in 2020 by 7%, the most affected areas being the Balearic and Canary Islands.

How to act to mitigate the possible effects of Brexit?
The United Kingdom is the most important sources of tourism for Spain to date, so it is imperative for hoteliers to pre-empt events; to monitor  the situa-tion and adapt their plans  accordingly, so they are able to continue stimulating the demand for direct bookings should they so desire.

It is essential to study the behaviour of the market and its demands, taking into account other potential countries, not just the British.  In this way, segmented campaigns can be created and targeted to the needs of each country.

It could also be advantageous, before a possible devaluation of the pound, to make the most of UK/s key dates such as Valentine's Day, Easter, summer va-cations, Christmas, etc. get ready with tempting discounts and promote them using more aggressive and short campaigns should the need arise.

In general terms, the most important thing is to anticipate, continue advancing and strengthen bookings to minimize any possible impact.

* Exposed data extracted from the volume of direct bookings made by British tourists from January 1st, 2019 until January 31st, 2020 with a representative sample of 8.000 Spanish hotels.