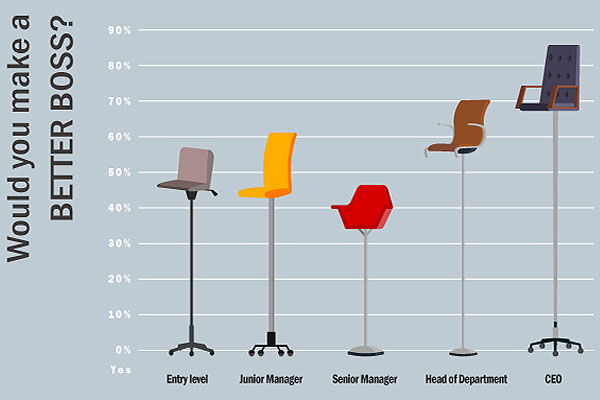 77% of junior management in the travel sector believed they were superior to their boss.

A survey ahead of Boss Day, a US national day which falls today, on October 16th this year, revealed that 6 in 10 employees in the UK think they could do the job better than their superiors.

The survey of 500 UK employees, conducted by bgo.com, saw 60% of respondents say they believed they could do a better job than their boss.

The Travel Industry had 57% of respondents say that they would be better than their boss but there’s a noticeably split between the entry level and junior management response.

While 41% of entry level employees believed they’d be a more efficient manager, a far greater 77% of junior management felt that they’d do a better job.

Jeremy Fletcher, CEO and founder of change-management consultancy Transform Finance, believes that the answer may lie in perception: “Employees are often not exposed to the full range of their boss’s role, nor the pressures or constraints that they are under.

Essentially, being unaware of what a boss or line manager does in detail leads to a belief that they would be able to do a better job. But with so many responders high up the chain of management, is this the only answer?

Another possible explanation is that a lack of influence that makes giving an opinion seem easier. As Carl Williams, Director at Williams Talent Management Consultancy points out: “Spectators always have more to say on how to do stuff if they know the comfort of their spectators’ seat isn’t under threat of change”.