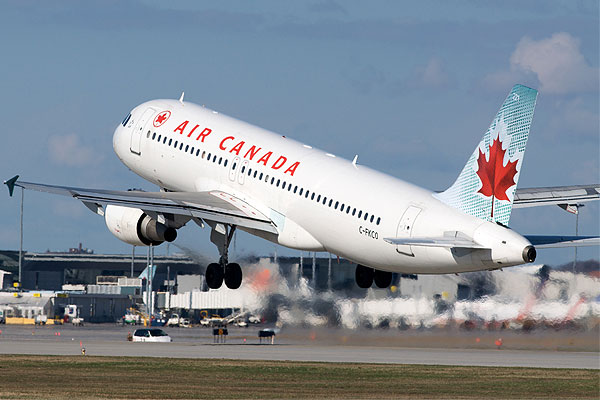 Air Canada’s Montreal-San Juan flights will operate with a 146-seat Airbus A320 featuring two classes of service with 14 Business Class seats and 132 seats in Economy Class.

MONTREAL – Air Canada inaugurated a new non-stop service between Montreal and Puerto Rico. This morning's departure of Air Canada flight AC958 marks the beginning of weekly flights from Montreal to San Juan's Luis Munoz Marin International Airport, which will operate as a seasonal service this winter.

"This new route from Montreal will make it easier for customers to travel to Puerto Rico from eastern Canada and complements our existing twice-weekly services between Toronto and San Juan. It also strengthens Air Canada's Montreal hub, which is playing a significant strategic role in our ongoing global expansion. Our capacity in Montreal is up nearly 20 per cent over the last two years and in the past year alone we have launched or announced 13 new destinations from the city, including Shanghai, Algiers, Lyon, and Marseille," said Benjamin Smith, President, Passenger Airlines at Air Canada.

"I would like to congratulate and thank Air Canada for adding San Juan, Puerto Rico to its already impressive list of non-stop destinations served from Montreal," said James Cherry, President and Chief Executive Officer of Aeroports de Montreal. "This new service will offer one more option to our passengers seeking to diversify their sun destinations."

Air Canada's Montreal-San Juan flights will operate with a 146-seat Airbus A320 featuring two classes of service with 14 Business Class seats and 132 seats in Economy Class. The aircraft features a personal seatback In-Flight Entertainment system and a power outlet available at every seat throughout the aircraft. Flights are timed for convenient connections through Air Canada's extensive international network and provide for Aeroplan accumulation and redemption and, for eligible customers, priority check-in, Maple Leaf Lounge access in Montreal, priority boarding and other benefits.

"Air Canada is very pleased to inaugurate this new, year-round service between Toronto and Port of Spain as part of our ongoing global expansion. In addition to being a popular vacation destination for Canadians, Canada and Trinidad and Tobago have longstanding ties, with many Canadians of Trinidadian descent visiting friends and relatives, and there are also substantial business ties. This new service will connect conveniently with our extensive domestic and international network through our Toronto-Pearson global hub," said Benjamin Smith.