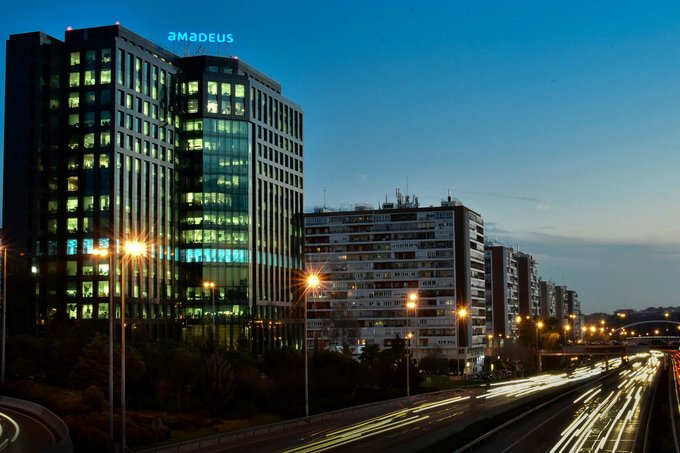 Business evolution in the quarter
Air Distribution
During the first quarter of 2022, our Air Distribution revenue maintained its positive progress and reached 446.0 million euros, which represents growth of 5.8 p.p from the fourth quarter of 2021 revenue performance versus 2019. The continued recovery of our bookings across regions, supported by market share gains, combined with an improving revenue per booking performance (as the weight of local bookings continues to decline towards its pre-pandemic level) were the main drivers of revenue in this segment.

Compared to the first quarter of 2019, we registered a 44.1% revenue contraction. This was largely driven by the reduction in air booking volumes compared to that period, and to a lesser extent, by a limited Air Distribution revenue per booking dilution due to a higher weight of local bookings and an increase in the cancellation provision. These effects were partly offset by several
positive impacts, including the softer contraction in several revenue lines, such as revenues from IT solutions provided to travel sellers and corporations.

In terms of our air bookings evolution, in the first quarter of 2022, we maintained the quarter-on-quarter progress based on industry recovery and higher market share, as explained above, relative to 2019. All our regions reported performance improvements. North America continued to be the best performing region and is now only 2.9% below Q1 2019 levels. The region is also the largest in size for us now, with 36.0% of our total air bookings generated in North America, followed by Western Europe, which represented 27.6%.

Some of the key commercial announcements in this segment during the first quarter were:

Air IT Solutions
In the first quarter of 2022, Air IT Solutions revenue growth improved by 4.9 p.p. from the previous quarter. Compared to the first quarter of 2019, revenue in this segment contracted by 25.9%, impacted by the lower airline passengers boarded volumes because of the COVID-19 pandemic, which were partly offset by a 22.5% higher Air IT Solutions revenue per PB. This increase in the revenue per PB mainly resulted from several revenue lines not linked to PB evolution (such as services and Airport IT, among others) reporting healthier growth rates than airline passengers boarded.

Some key commercial deals in the quarter were:

Airport IT
Some key customer wins in this business were:

Hospitality’s positive revenue evolution was supported by steady progress across all business lines: 1) In Hospitality IT, revenue evolution was mostly driven by an increase in CRS revenues, compared to the previous quarter, and performance improvements in subscription-based revenues. 2) The progress in hotel and car bookings growth rates contributed to the performance of Media and Distribution revenue. 3) Finally, Business Intelligence revenue, which has a higher weight of non-transaction-based revenues, benefitted from customer implementations.

Hospitality
Some of the key commercial deals in this business were:

Luis Maroto, President & CEO of Amadeus, commented, “This encouraging progress was possible thanks to recovering travel volumes, and the positive momentum across our businesses with consistent improvements in air bookings and passengers boarded, with North America leading both metrics. In Air Distribution, we continued to have market share gains4 during the quarter and in Air IT we started the year with a number of new PSS deals. Hospitality registered the strongest revenue growth rate compared to the previous quarter and is the segment closest to full recovery. We are hopeful this trend will continue throughout the year”.