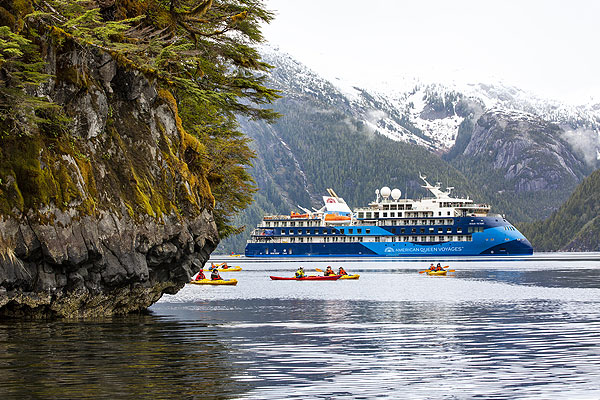 A choice of  complimentary shore and Zodiac excursions as well as kayaking from the ship’s own marine platform will be available throughout each voyage.

American Queen Voyages – famous for its paddlewheeler river cruises – launched its first expedition ship this month, with the new, luxury, 186-guest Ocean Victory debuting in Alaska to offer a season of 11 and 12-night deep-nature adventures from May to September this year and also in 2023 and 2024.

Adding to the value are a choice of complimentary inclusions such as a pre-cruise hotel stay, all onboard meals, onboard beverages, comprehensive shore excursions, port charges and ships gratuities.

Ocean Victory carries Zodiac craft, kayaks and a team of naturalists, marine biologists, scientists and historians. The cruise line has also teamed up with the California Polytechnic State University, the Sound Science Research Collective and Sitka Sound Science to bring experts and students onboard for daily lectures and hands-on demonstrations. And unique hydrophone technology onboard allows guests to listen to the mystical sounds of humpback whales underwater.

American Queen Voyages’ first foray into Alaska sees the line take lovers of casual luxury and nature to secluded, less visited villages as well as breathtaking glaciers and wildlife sanctuaries between Vancouver in Canada and Sitka in Alaska.

Smaller, more remote and less visited destinations in Alaska featured in the cruises include the Russian- flavoured island town of Sitka, the black bears, humpback whales and bald eagles of Frederick Sound, the hiking, moose and native Tlingit culture of Kake, the spectacular glaciers dropping into the fjords of Endicott and Tracy Arms, the pristine ‘Little Norway’ wilderness of Petersburg, the harbour village of Wrangell, the towering sea cliffs and waterfalls of Misty Fjords, the traditional Tsimshian community of Metlakatla and the colourful native culture and salmon centre of Ketchikan.

A choice of  complimentary shore and Zodiac excursions as well as kayaking from the ship’s own marine platform will be available throughout each voyage.

Hospitality sector among most breached: what does that say about your boss’s passwords?