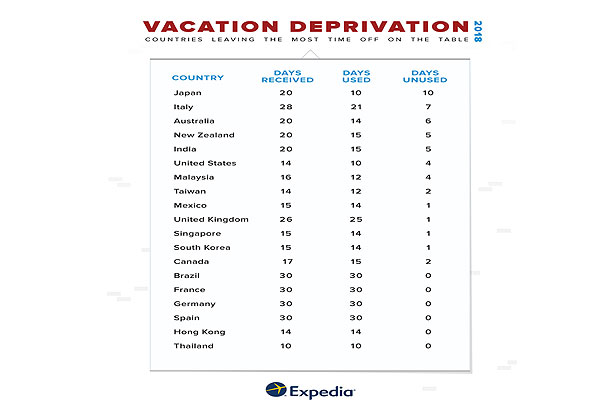 Expedia study reveals U.S. workers will fail to use 653.9 million vacation days in 2018

BELLEVUE, WASH. – Expedia.com released the results of its 18th annual Vacation Deprivation study, which examines vacation usage and trends across 19 countries. The report found that global vacation deprivation is on the rise, and that workers in the U.S. took the fewest number of vacation days in the world in 2018, alongside Japan and Thailand.

With the number of U.S. vacation days awarded and taken at a five-year low, it's no wonder that vacation deprivation levels for Americans are at a five-year high (59%, up 8% from 2017). According to the report, American workers received 14 vacations days and used 10, resulting in 653.9 million days left on the table in 2018(1).

Topline results from the 2018 report include:

Expedia's 2018 report uncovers new attitudes and behaviors driving vacation deprivation and digs deeper into the positive effects of taking time off on mental health and self-image.

"One of the leading reasons people don't use their vacation days is that they're saving them for a big trip, which means they're going longer and longer between vacations," says Nisreene Atassi, global head of communications for Brand Expedia. "Bigger trips are great, but even a quick break can significantly improve quality of life. Aim to schedule a staycation or add an extra day onto a holiday weekend in between longer trips to get the best of both worlds."

"Fear of Switching Off" – is it all in our heads?
63 percent of Americans go six months or longer without a vacation, with more than a quarter (28%) going a year or more sans time off. Considering time off is so precious, one might be surprised to hear that a quarter of Americans admit to checking work email/voicemail at least once a day while on vacation.

While this behavior has stayed mostly consistent over the past decade, perhaps there's hope for future generations – younger workers are the least likely to check in frequently, at 19 percent for 18-34-year-olds, compared to 31 percent of the 50 and over crowd.

Interestingly, the pressure to be available may be self-imposed – only a small number of respondents say their managers (17%), junior staff (10%) and clients (12%) expect them to check-in daily while on vacation, proving most people need to simply give themselves permission to unplug.

Even a short getaway boosts self-esteem and confidence
With the biggest barriers to vacation being financial (54%), the desire to bank vacation days (23%) and inability to get time off work (17%), it begs the question: how long does one need to get away to reap the benefits of vacation? The study uncovered good news for those scarce on funds or time:

Americans are savvy to this shortcut: 59 percent say they use short trips to fight off vacation deprivation in between longer getaways. To get the most out of a quick trip, try to keep travel time under four hours and choose accommodations close to the area's main attractions.

Taking a mental break
The growing focus and conversation around mental health may be changing how Americans vacation. A whopping 81 percent of U.S. respondents say they regularly take vacations where their primary goal is "mental wellness," and they overwhelmingly feel that vacation is a chance to "hit the reset button" on stress and anxiety (91%). Americans also report taking an average of two mental health days each year, which most feel should be considered sick days (67%), rather than vacation time.

"A wellness-centric trip doesn't have to mean a spa or yoga retreat, although those are popular options," says Atassi. "For most of us, recharging simply means we need to disconnect and slow down. Whether it's a family vacation or a solo escape, set rules about how often you're allowed to check email and try not to overschedule your days."

These are the best times to buy Thanksgiving and Christmas flights

Expedia unlocks new way to save on travel