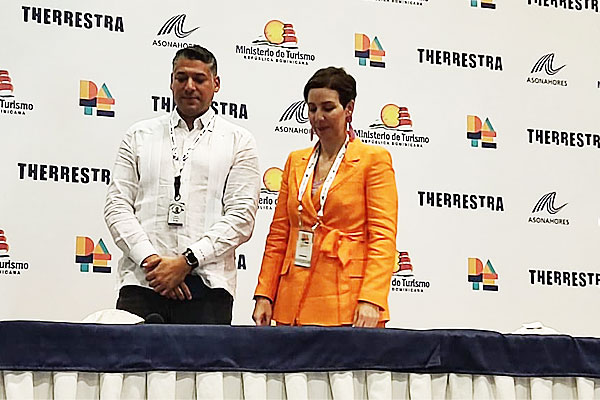 ARAJET will begin operations in July with five modern Boeing MAX 737-800 aircraft with the latest technology, from Las Americas International Airport, with flights to Costa Rica, Colombia, Jamaica and other Caribbean islands.

With the agreement, ARAJET will be able to establish its entire air operation to and from Santo Domingo, and begin its low-cost operation with non-stop point-to-point flights, which will later evolve into a connection hub model in Santo Domingo. AILA will be the home of Arajet's latest-generation modern 737 MAX 8 aircraft, which will offer the lowest prices in the market, a world-class service with the best technology and punctuality.

The president of the board of directors of ARAJET, Víctor M. Pacheco Méndez commented: “We are very excited to start flying from the Las Americas International Airport, JFPG as the base airport for our operations. Being Santo Domingo the city that concentrates the largest population in the country, we know that it will be of great comfort for all our passengers to fly from the AILA-JFPG located a few minutes from the city, as well as connecting with the beaches of La Romana and Punta Cana".

"We are happy that ARAJET has selected VINCI Airports as its partner to have its base in Santo Domingo from Las Americas International Airport, JFPG. Without a doubt, this is the beginning of a new era of travel that will be key to the expansion and growth of this terminal. We will be delighted to be able to offer passengers more flight options between the Dominican Republic and the rest of the Americas with ARAJET”, said Monika Infante, General Director of AERODOM.

ARAJET will be the first low-cost airline in the Caribbean that will be providing nonstop services to more than 40 destinations in the United States, Mexico, South America, Central America and the Caribbean. In addition, the Dominican Airline is led by a board and management team with extensive experience and background in low-cost airlines. It is also backed by Boeing and well-known investors in the global aviation industry such as Griffin and Bain Capital.

ARAJET will start its flights in July 2022 with five modern Boeing 737 MAX 8 aircraft with the latest technology and high capacity. The airline placed an order for 20 Boeing 737 MAX aircraft that are in the delivery and manufacturing process, with the option to acquire an additional 15 jets, which together with existing lease agreements totals a fleet of 40 aircraft.

“The announcement of the selection of AILA-JFPG as its headquarters will have a very positive economic impact in the area by generating new direct and indirect jobs, and attracting more tourists to the Dominican Republic. Our customers will benefit from new low-cost routes, with interesting schedule and travel options. We are very happy with this announcement and we will continue to offer all our support to ARAJET for its success", added the CEO of AERODOM.

VINCI Airports is the main global private airport operator, which since 2016 manages AERODOM in the Dominican Republic, a company that holds the concession to operate six airports in the country, expiring in 2030. It handles an average of five million passengers annually who travel to 58 cities around the world.

Las Americas International Airport – José Francisco Peña Gómez is the main air terminal in the Dominican Republic due to its location, it ranks second in the flow of regular passengers in the country. AERODOM recently concluded the implementation of important infrastructure improvements, as part of an aggressive modernization and optimization plan that seeks to improve the passenger experience, facilitate exports and offer the best gateways to the Dominican Republic.

The agreement was announced during the DATE 2022 fair, organized by ASONAHORES.