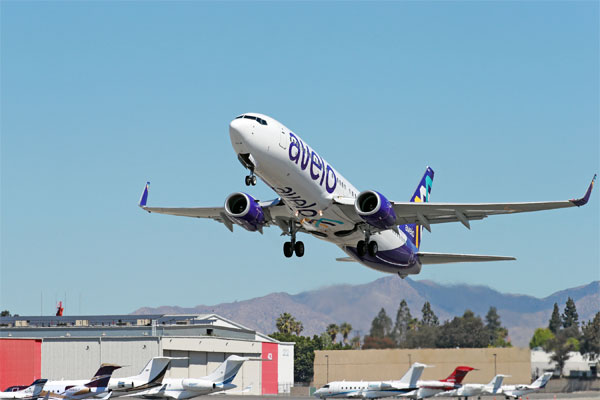 Avelo is the first airline to offer nonstop flights between HVN and Florida. Avelo’s arrival to HVN also marked the largest expansion of service at HVN in more than 30 years.

"We're excited to begin the New Year with this new, convenient and affordable direct service to Southern Connecticut," said Avelo Chairman and CEO Andrew Levy. "With our very low fares and HVN's unmatched convenience, Avelo makes getting to Connecticut and all this region has to offer easier than ever. We can't wait to welcome our new Sarasota-Bradenton Customers aboard to experience our exceptional service and the best hospitality on the East Coast."

"We are thrilled that Avelo Airlines has chosen Sarasota Bradenton International Airport to be part of their air service network. With low fares and convenient nonstop service to New Haven, passengers will have an affordable connection between two high-demand destinations. We look forward to welcoming Avelo Airlines to SRQ and we're confident their service will be a great success and expand in the future," said Rick Piccolo, Sarasota Bradenton International Airport president, chief executive officer.

"Visit Sarasota is thrilled that such an exciting new airline with a commitment to affordability and service is coming to SRQ and providing great new travel opportunity for our residents and visitors," said Virginia J. Haley, President of Visit Sarasota.

"We are truly humbled to be adding Avelo Airlines to our non-stop service at the Sarasota Bradenton International Airport. We know that our community leaders will work hard to grow our partnership with the airline and set us apart as one of the best airports in the country," said Elliott Falcione, Executive Director of Bradenton Area Convention and Visitors Bureau. "With Avelo's strong leadership and business model, there is no doubt in our minds that this airline will continue to grow across the United States, giving the Sarasota-Bradenton community an incredible opportunity to grow with them."

"The Bradenton Area EDC is excited to welcome Avelo Airlines' direct service to SRQ from New Haven, Connecticut – a market with huge potential for both capital investment and corporate relocations to our community," said Sharon Hillstrom, EDC president and CEO. "The New Haven region abounds with corporate headquarters, wealth management companies, and New York-based, corporate decision-makers. We look forward to having greater access to that market as we implement our strategic plan to recruit more businesses, jobs and capital investment to the Bradenton area."

The New Way to Connecticut
Best known as the home of Yale University, New Haven is the second largest city in Connecticut and is part of the New York metropolitan area. The coastal city has experienced—and continues to enjoy—a renaissance. Within an easy stroll from the New Haven Green are more than 100 distinctive restaurants, offering something for every palate, and the city abounds with theaters, museums, and shopping destinations to satisfy all interests and tastes.

New Haven has a rich cultural heritage, from museums and theatres to music festivals and entertainment throughout the year, including the New Haven Jazz Festival, the annual St. Patrick's Day Parade, and the Wooster Square Cherry Blossom Festival that regularly bring thousands of visitors to the city.

"We couldn't be more excited to begin service to Sarasota Bradenton International Airport (SRQ), our sixth non-stop destination from Tweed-New Haven. We've been blown away by the overwhelmingly positive reception Avelo has received and the staggering amount of passengers who have come through our doors since November. The addition of SRQ will give Connecticut yet another affordable and accessible way to get to Florida this winter," said Sean Scanlon, Executive Director of Tweed-New Haven Airport Authority.

Amidst the crowds, long lines, lengthy walks and traffic congestion encountered at other airports frequented by travelers to and from the region, HVN offers a refreshingly smooth and simple alternative hometown airport experience. HVN's adjacency to multiple major highways and commuter railways make it Connecticut's most convenient and easily accessible airport.

Avelo is the first airline to offer nonstop flights between HVN and Florida. Avelo's arrival to HVN also marked the largest expansion of service at HVN in more than 30 years.

A Different, Better and More Affordable Travel Experience
Avelo's everyday low fares have no change or cancellation fees. There is also no charge for Customers who choose to make reservations by phone. Additionally, Avelo offers several unbundled travel-enhancing options that give Customers the flexibility to pay for what they value, including priority boarding, checked bags, carry-on overhead bags, and for bringing a pet in the cabin.

Avelo became America's first new scheduled airline in nearly 15 years when it initiated service on April 28, 2021, from its first base at Los Angeles' Hollywood Burbank Airport (BUR). The airline – which offers a convenient, affordable, and caring experience – currently serves 19 popular destinations across the U.S.

Avelo is distinguished by its Soul of Service culture. The culture is grounded in a "One Crew" mindset that promotes teamwork, understanding and kindness. By caring for one another and owning their commitments, Avelo Crewmembers provide a smooth, enjoyable, reliable, and caring experience for its Customers.