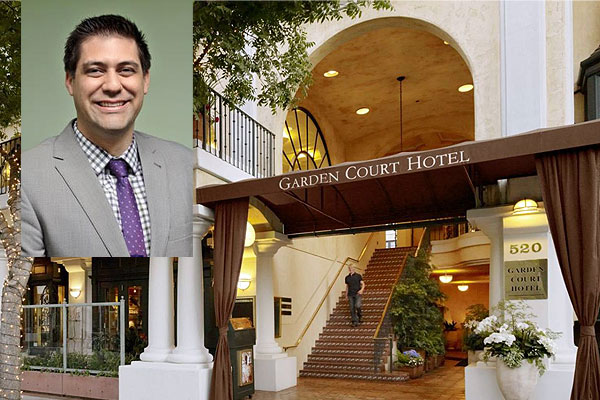 Brayton Gosling takes the helm at the Garden Court Hotel.

PALO ALTO, CALIF. – The Garden Court Hotel in downtown Palo Alto appoints Brayton Gosling, an accomplished hospitality expert most recently with Hotel Los Gatos, as the new General Manager. In his new role, Gosling will be responsible for the day-to-day operations of the well-known 62-room luxury hotel located in the heart of Silicon Valley.

“We are thrilled for Brayton to join the team and know his strong leadership abilities, hospitality background and relationship building skills will enhance the experience of our guests,” says Jan Henningsen, COO of the HotelCrafters, the management company operating the hotel. “We are confident his expertise and vision towards the future will further elevate the Garden Court Hotel experience.”

A 10-year veteran of the hospitality industry, Brayton most recently served as the General Manager of Hotel Los Gatos, where he was involved in the development of the management team and ensured the financial and strategic objectives 72-room luxury property. Prior, he served as Hotel Los Gatos’ Hotel Manager and the property’s Front Office Manager. Previously, he worked at the Domain Hotel in Sunnyvale. Brayton severed on the Los Gatos Chamber of Commerce board for three years and was president a year-and-a-half.

Brayton holds a bachelor’s degree in communications from the University of California San Diego.