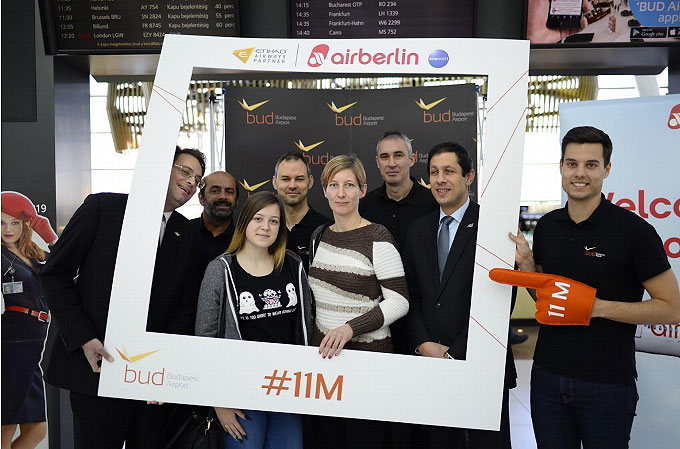 Budapest Airport celebrated another all-time high on 13 December 2016, welcoming its 11 millionth passenger in a year, the first time this milestone has been reached in the airport’s 66-year history.

Hungary’s capital city airport has grown a remarkable 25% in the last two years and is forecasting another healthy year ahead having already announced 11 new routes.

An outstanding 19.2% increase in passenger traffic in December alone saw Budapest Airport continue its record-breaking trend, with the Hungarian gateway welcoming 11.4 million passengers by the end of 2016 – a figure never before reached at the airport. With six months of the year breaking the one million passenger barrier, Budapest celebrated 23 new routes in 2016, including 16 new destinations, meaning a total of 43 airlines connected the airport to 111 destinations across 38 countries last year.

Hungary’s capital city airport has grown a remarkable 25% in the last two years and is forecasting another healthy year ahead having already announced 11 new routes, as well as the arrival of another new airline partner, Flybe. Operated by Stobart Air, the carrier will boost Budapest’s links to London, commencing the airport’s fifth link to the UK capital city in May.

Wizz Air continues to support the development of its home-base, confirming the addition of nine new services during S17 which will see Budapest’s largest carrier operate 54 non-stop destinations from the capital city airport this year. Meanwhile, the return of TAP Portugal with a daily service to Lisbon and easyJet’s three times weekly link to Amsterdam, will meet considerable consumer demand on both these destinations from Hungary.

Infrastructure investment
To meet the requirements of Budapest’s continuous route network expansion, the airport is investing approximately 180 million euros into its infrastructure. Over the next three years the gateway will see a number of developments including a new Pier, check-in extensions, parking upgrades and a new airport hotel. Having also closed a successful year in cargo operations, with an annual growth of 23% exceeding 112,000 tonnes of cargo in 2016, the airport is expanding to meet the increasing demand with an additional cargo terminal set to open in 2018.

Looking to the year ahead, Kam Jandu, CCO, Budapest Airport said: “We welcomed over one million more passengers last year than we did in 2015, an impressive 11% year-on-year increase, making us one of the fastest growing capital airports in Europe at this time.” He added: “We start 2017 with solid foundations which we fully expect to build upon, not only with infrastructure developments but also further expansion of our route network, ensuring we remain the best in the region.”