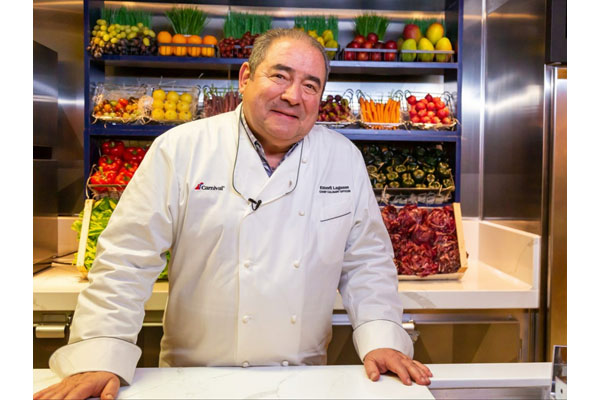 Another Emeril’s Bistro will be part of the dining experience on Carnival Jubilee.

MIAMI – Carnival Cruise Line announced that renowned chef and restauranteur Emeril Lagasse will serve as its Chief Culinary Officer. A restaurant concept created by Lagasse, Emeril's Bistro, is already popular on two of Carnival's most innovative ships, Mardi Gras and Carnival Celebration, and now the famous chef's culinary talents will be utilized fleetwide. In conjunction with this announcement, Carnival also announced that Carnival Jubilee will also feature an Emeril's Bistro when it arrives in Galveston, Tex. in December 2023. To see a video of Lagasse sharing the news, click here.

Carnival Cruise Line announced that renowned chef and restauranteur Emeril Lagasse will serve as its Chief Culinary Officer. A restaurant concept created by Lagasse, Emeril’s Bistro, is already popular on two of Carnival’s most innovative ships, Mardi Gras and Carnival Celebration, and Carnival also announced that Carnival Jubilee will feature an Emeril’s Bistro as well when it arrives in Galveston, Tex. in December 2023.

"Food is key to the fun of a Carnival cruise," said Christine Duffy, president of Carnival Cruise Line. "Emeril's restaurants on our two new ships have been a great addition to our dining offerings and guests rave about the food, which will also be on Carnival Jubilee come next December. With Emeril's culinary expertise and broader profile on our ships, along with our wildly popular partnership with Food Network star Guy Fieri, Carnival will feature two iconic talents in the food and dining industry across our fleet."

As Chief Culinary Officer, Lagasse will support Carnival's skilled chefs with guidance on food trends and techniques as well as advise on future menu items and dining concepts. Guests will also see his input on the menus of main dining rooms fleetwide, including entrées designated as "Emeril recommends" picks.

"I've been creating and operating restaurants for many years but developing my restaurants with Carnival and learning about the cruise industry has been an exhilarating experience. I love Carnival's focus on food and fun and the many great dining options they offer their guests. I'm looking forward to building on our success at sea with Carnival's exceptional culinary team," said Lagasse.

Lagasse is a James Beard Award winner, known for his mastery of Creole and Cajun cuisine and one of New Orleans' most respected chefs. In addition to his acclaimed restaurants across the country, he has been welcomed into homes nationwide for decades through his popular cookbooks and television cooking shows, including his current show "Emeril Cooks," which debuted on Roku earlier this year.

Carnival offers its guests outstanding choices in casual and fine dining, and the last several months have been filled with awards from Cruise Critic, Travel Weekly, The Points Guy, Good Housekeeping and Reader's Digest that recognize the great value and dining options – many of which are fully inclusive with standard bookings. Fieri's Guy's Burgers is the first stop for many guests after they board their cruise, and his fleetwide offerings have been expanded to include Guy's Pig & Anchor Bar-B-Que Smokehouse on newer ships joining the fleet.

To celebrate Lagasse's new role, Duffy has invited him to join her in New York this weekend, where Carnival is sponsoring the countdown clock, and serving as a musical sponsor, for the famous Times Square ball drop. Carnival's integration with the iconic New Year's Eve Celebration in New York City will also serve as one of the first launching points of Carnival's new "Choose Fun Together" marketing campaign. The new ads highlight those special moments of fun that can only happen when people come together on a Carnival cruise – because we are our most fun selves when we choose fun – together. In that spirit, Duffy and Lagasse will flip the switch on the New Year's Eve countdown clock together.

The event also coincides with the cruise line's line expansion of operations in New York City, with year-round departures from the Manhattan Cruise Terminal on board Carnival Venezia beginning in June.

Spend the first day of 2023 hiking in America's State Parks