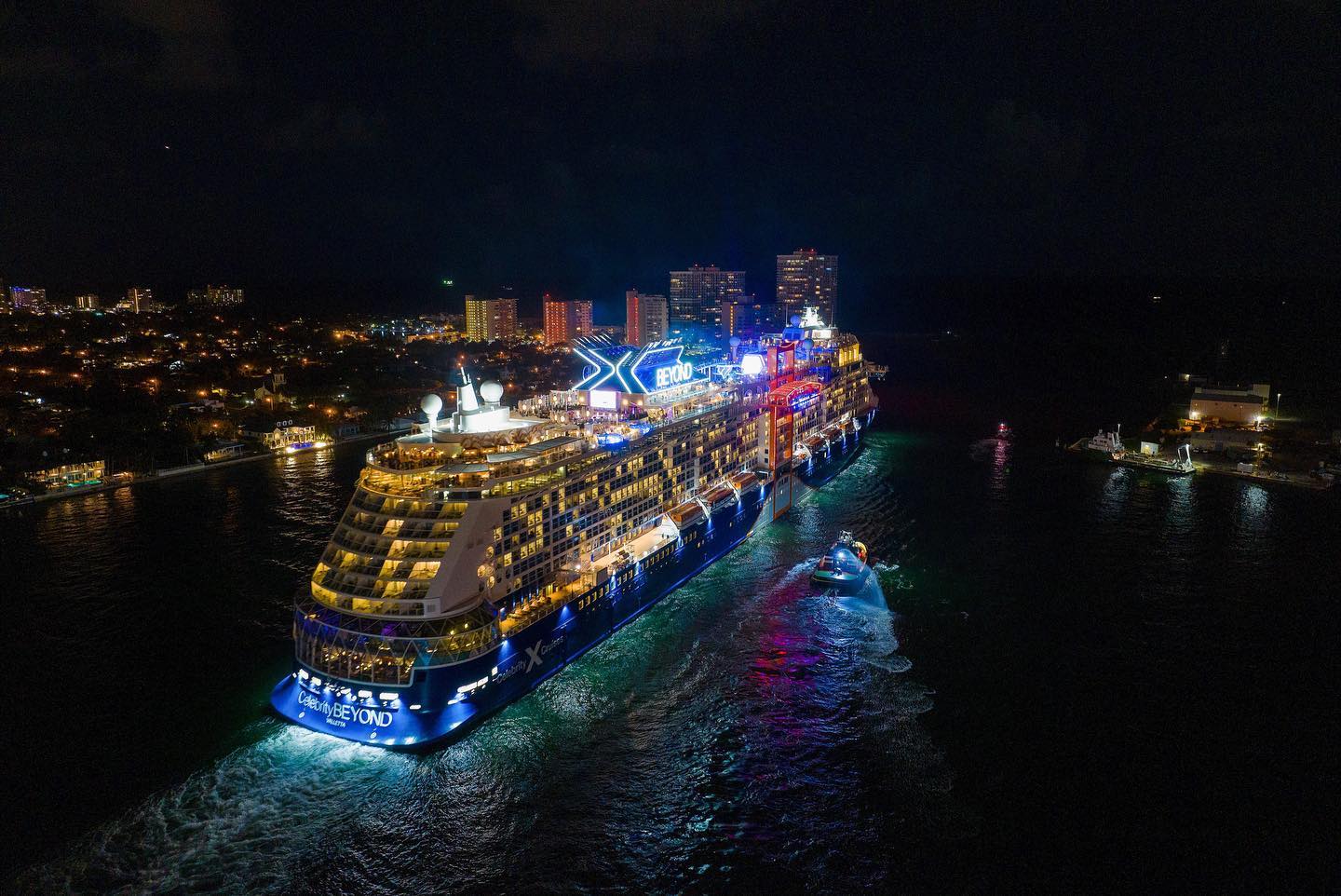 The third ship in the line’s transformational Edge Series kicks off its inaugural season sailing from Fort Lauderdale, ushering in a new era of cruising.

FORT LAUDERDALE, FLA. – Excitement and anticipation hung in the air as Celebrity Cruises' G.O.A.T., and newest and most luxurious ship, Celebrity Beyond, set sail from Fort Lauderdale this past weekend, kicking off its inaugural Caribbean season. Headlining the sailing's highly-anticipated festivities was the ship's official naming ceremony, led by her lauded Godmother and inspirational female powerhouse, Simone Biles – a G.O.A.T. in her own right – a 19-time World Champion, seven-time Olympic Medalist and most decorated American gymnast in history.

Helmed by the barrier-breaking Captain Kate McCue, the first and still only woman to be named captain of a "Mega" cruise ship, Celebrity Beyond's much anticipated arrival to the U.S. ushers in a new era of cruising for the industry; coming on the heels of Celebrity's new brand campaign that defines what a relaxed luxury resort at sea is. As it kicks off its inaugural season with rotating Western and Eastern Caribbean itineraries visiting the sun-drenched beaches of Grand Cayman and picturesque vistas of Puerta Plata, guests will recharge as they are treated to luxury hotel- style accommodations, Michelin-level dining, and world-class wellness amenities.

"I can think of no one better to be the Godmother of this incredible ship than the G.O.A.T. herself – Simone Biles," said Jason Liberty, President and CEO of the Royal Caribbean Group, the parent company of Celebrity Cruises. "This ship's beauty, power, and resilience sets the standard by which all others will be measured. Simone's determination, progressive nature, empowered attitude, and grace in the face of challenges make her such an inspiration to so many around the world. All of these attributes are why Simone Biles is perfectly suited to watch over Celebrity Beyond's journey."

"I've been waiting for this day to arrive for a long time and I am 'Beyond' excited to be able to share her with our guests. She is the gold standard by which other ships are built and embodies the meaning of relaxed luxury," said Lisa Lutoff-Perlo, Celebrity Cruises President and CEO. "She is 'FULL' of wonder and excitement and our guests will undoubtedly feel reconnected to the world around them as they visit new destinations and immerse themselves in culinary experiences and wellness amenities not found anywhere else at sea."

Alongside Liberty, Lutoff-Perlo and other Celebrity Cruises executives, Simone Biles officially named Celebrity Beyond in a beautiful ceremony attended by 2500 lucky guests and media, capped by a live performance from award-winning singer and songwriter, Leona Lewis.

Simone Biles follows Reshma Saujani of Girls Who Code and Nobel Peace Prize Laureate Malala Yousafzai, who previously inaugurated Celebrity Apex and Celebrity Edge, respectively. Both women are renowned for their advocacy of women everywhere, inspiring them to soar above their limits.

"It is an honor to be selected as Beyond's Godmother and to join such a distinguished group of strong, barrier-breaking women who have been named as Celebrity's Godmothers before me," said Simone Biles. "I appreciate the important message this designation holds in recognizing our accomplishments as empowering women, and I am honored to share the stage today with fellow brave, boundary-breaking leaders like Lisa-Lutoff Perlo and Captain Kate McCue."

As the most decorated American gymnast in history, with 32 medals from the World Championships and seven medals from the Olympics, Biles is also the first American woman to win seven national all-around titles and is the first female gymnast to earn three consecutive World All-Around titles. As well as her more than inspiring gymnastic accomplishments, she has been included in important lists such as TIME'S 100 Most Influential, Forbes 30 Under 30, Ebony Power 100, amongst many others, placing herself firmly as a role model for women everywhere.

Beyond All Expectations
Inspired by a vision to take the cruise industry into the next era of luxury, Celebrity Cruises assembled an award-winning dream team of modern lifestyle icons for Celebrity Beyond to bring to life extraordinary experiences that allow guests to connect with each other, the sea, and the world around them. Celebrity Beyond showcases the design talents of multi-award-winning British designer Kelly Hoppen CBE; celebrated American designer Nate Berkus; and lauded Paris-based design firm Jouin Manku; the innovation of British architect Tom Wright; the culinary talents of Michelin-starred chef and restaurateur Daniel Boulud; and experiences and products from goop CEO and founder Gwyneth Paltrow, the brand's Well-Being Advisor.

Every element of Celebrity Beyond's look and feel has been carefully curated with re-imagined, upgraded spaces and a host of luxurious amenities.