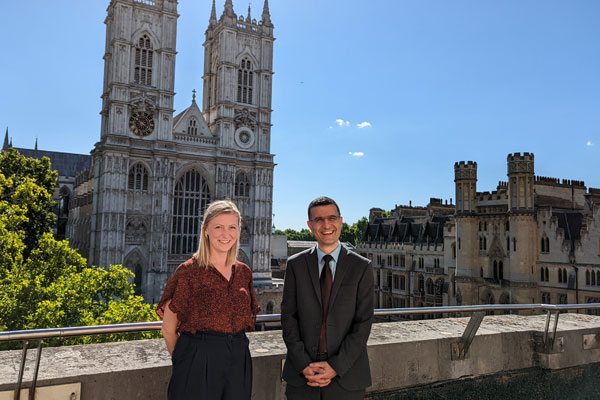 Rhiannon Thomas has been promoted to CHV Head of Sales and Emre Cevik has been appointed Head of Venue Operations at Central Hall Westminster.

Reporting to CHV Chief Operating Officer, Sarah Franczak, Rhiannon brings a wealth of experience and new ideas to the group in an exciting time following expansion of the venue portfolio for the group. Part of her new role will be to support the new venues, NSE and SSY as they prepare to welcome an even wider range of events. She will also continue to look after sales at CHV’s flagship venue, Central Hall Westminster for corporate events as well as concerts, exhibitions, and graduation ceremonies. In addition, she leads a team of three including the Business Development Manager and two Sales Account Executives.

Rhiannon comments: “I am thrilled to be taking on the role of Head of Sales for Central Hall Venues at a very exciting time for the group. As well as heading up the team, I am looking forward to taking a proactive and innovative approach to boosting sales at the venues for diverse events that suit each venue. For example, Nicolson Square Edinburgh is ideally placed for cultural events such as the Edinburgh Festival and St Saviourgate York has a tradition for hosting third sector events. I am excited about expanding their range of events even more at these venues which are steeped in history, just like Central Hall Westminster.”

In addition, Emre Cevik takes on the role of Head of Venue Operations at Central Hall Westminster. With over 30 years of experience in the hospitality and events industry, Emre’s previous role was as Head of Commercial Services for the Quakers at Friends House, Euston. Also reporting to the COO, Emre’s key responsibilities will be to ensure the success of day-to-day operations within the CHW building with long-term objectives to contribute to its commercial success, among others. He will also work in close collaboration with other Heads of Venue from the Central Hall Venues group and liaise with service partners for successful delivery of event services.

Emre comments: “After 13 years at Friends House, Euston, it was time for a change and I am delighted to be working in this fantastic new role at CHW, based at this historic landmark building in the heart of Westminster. Friends House and CHW with their Grade II Listed heritage buildings alongside the ethos of giving back for the greater benefit of the community and charitable causes are very similar, so I’m excited to be part of this growing team at a key time for the organisation.”

Ryanair and 15below celebrate 20-year partnership