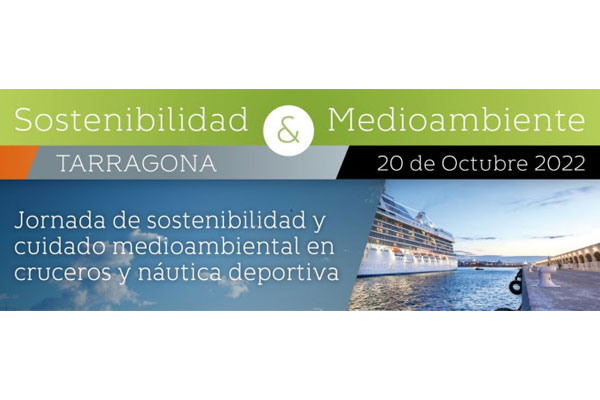 The event, developed by CruisesNews Media Group and AWP Services with the collaboration of CLIA, will be held from 9 am to 1:20 pm at the Teatret del Serrallo, at Moll de Pescadors 1.

TARRAGONA – Today, Thursday 20 October 2022, Tarragona host a conference where top-level professionals from the cruise and large yacht industry will try to shed light on the initiatives they are implementing in terms of sustainability and environmental care.

These are two maritime sectors in the permanent spotlight of public opinion and media because of their reputation for polluting and, in the case of cruises, for tourist overcrowding. However, cruise ships are at the forefront of the maritime industry in the development and use of new technologies and fuels that reduce atmospheric emissions, and their sustainability programmes reach levels that are difficult to encounter in other sectors. The economic impact that this kind of tourism brings to the region that receives it is substantial, as on average, each cruiser spends 660 euros in total in the destinations they visit during a seven-day cruise, according to a study by the CLIA organisation.

Similarly, yachting is adapting rapidly to an increasingly demanding environmental scenario. Spanish marinas and recreational boating position Spanish coasts among the most attractive and sustainable in Europe, with a very significant economic and social impact at local level.

Both cruise ships and mega yachts require support infrastructures in ports and marinas to comply with the most advanced environmental and sustainability objectives, which is precisely why the Port of Tarragona and Marina Port Tarraco are the promoters of this conference, It  will be attended by prominent executives from cruise shipping companies such as MSC, Costa Cruceros and Silversea Cruises, port terminals, marinas, shipping agents and mega yacht shipyards.

The event, developed by CruisesNews Media Group and AWP Services with the collaboration of CLIA, is held from 9 am to 1:20 pm at the Teatret del Serrallo, at Moll de Pescadors 1, and is aimed at tourism professionals, businessmen, agencies, cruise ships, and the nautical industry, but also the media and public opinion.

Josep Maria Cruset i Domènech, President of the Port Authority of Tarragona, will open the day with a talk on cruise activity in Tarragona. Next, Alfredo Serrano, National Director at CLIA Spain, will talk about the latest advances in sustainability in the cruise industry, followed by Alba Colet, Commercial Manager of Tarragona Cruise Port, who will show attendees what the future Tarragona Cruise Terminal will be like.

A round table discussion with prominent cruise industry executives, moderated by Virginia López Valiente, CEO of CruisesNews Media Group, will analyse the advances in sustainability, before giving way to a second part of the event focused on large yachts with Pablo Peiró, Manager of the Spanish Association of Large Yachts, commenting on the general situation of the large yacht sector, followed by Antonio Zaforteza, CEO of Ocibar, who will explain the economic impact of mega yacht terminals such as Port Tarraco and the rest of the terminals managed by Ocibar.

A second panel discussion moderated by Eva Miquel Subías, partner at AWP Services, with executives from shipyards and other companies involved, will analyse the economic impact and sustainability of recreational boating.

Finally, Pau Riomà, Mayor of Tarragona, will put the finishing touch to the event.