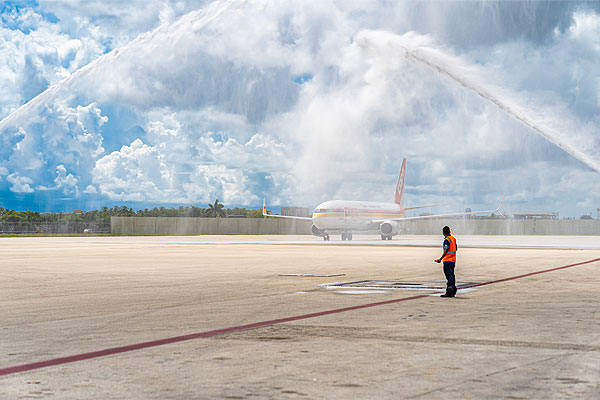 The highlight of the event was the debut of Copa’s 75th anniversary commemorative aircraft design of a Boeing 737-800NG model that was recently unveiled in Panama.

MIAMI – Copa Airlines, a subsidiary of Copa Holdings, S.A. and a member of the global network of Star Alliance airlines, brought its 75 th anniversary celebrations to Miami with an event at Miami International Airport to mark a historic occasion and the importance of the airline’s first route in the United States, which continues to be its largest operations base in North America servicing six daily flights. The highlight of the event was the debut of Copa’s 75th anniversary commemorative aircraft design of a Boeing 737-800NG model that was recently unveiled in Panama.

“Today’s celebration recognizes Copa’s growth from a small, local Panamanian airline to a world-class leader in aviation,” said Marco Ocando, senior director of marketing, communications and frequent flyer program for Copa Airlines. “Copa Airlines has been the bridge that connects South Florida to Latin America for more than 30 years, and we’re honored to be able to collaborate alongside the hard-working team at Miami International Airport to ensure that we keep the local community connected with their friends, families, and businesses throughout the Americas.”

Copa’s Boeing 737-800 with the custom commemorative paint design pays homage to the airline’s roots from the 1990s and reflects a critical period in its history when it launched what is known today as the Hub of the Americas, which serves as the epicenter of connectivity for the airline. Today’s event not only commemorates Copa’s 75 years of connecting the Americas but also its partnership with Miami International Airport, which started on December 1, 1989. This date also marks a special occasion as the airport celebrates its 94th year of operations on September 15 and highlights the importance of Miami’s reputation as the gateway to Latin America.

“Nearly 33 years after becoming Copa’s first U.S. destination, we are proud to now celebrate their 75 th anniversary and to welcome their commemorative anniversary aircraft,” said Miami-Dade County Mayor Daniella Levine Cava. “Copa has been an important partner in our community since 1989, and we wish them continued success in the decades to come.”

“Congratulations to Copa on reaching this major milestone in their illustrious history,” said Ralph Cutié, MIA Director and CEO. “We are extremely honored that they chose MIA to celebrate their 75th-anniversary aircraft design. Thanks to Copa, we proudly serve more than 800,000 passengers to and from Panama annually, which makes it our 10th -busiest international market.”

The Boeing 737-800 NG, registration number HP-1841, was painted at the Copa Airlines Maintenance Center, located at the Tocumen International Airport in Panama City. More than 30 people participated in the process, including aviation painters, designers, and engineers, totaling over 2,500 hours of work in 15 days.

How to organize your trip to Serbia