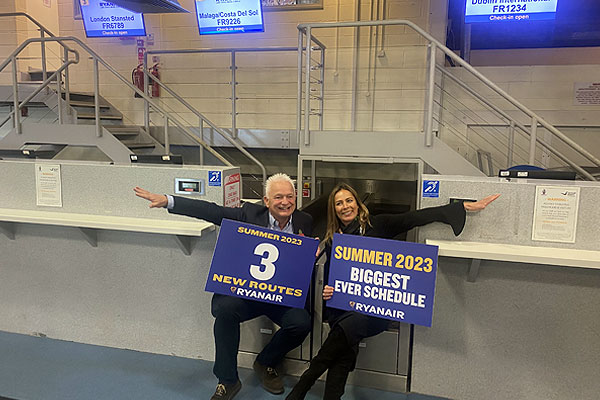 Operating over 25 weekly flights during S23, Ryanair’s new links mark almost a 60% growth in the ULCC’s services from NQY, as they join established connections to Faro and Alicante.

Continuing to witness a significant expansion of its route network, Cornwall Airport Newquay (NQY) has announced that Ryanair will launch three new connections during next year’s summer schedule. Set to commence on 23 April 2023, the Irish ultra-low-cost carrier (ULCC) will connect the Cornish gateway to Dublin, London Stansted, and Malaga.

Enhancing Cornwall’s connections to international sun destinations has long been a priority for the gateway. Ryanair’s connection to the Andalusian city on the shores of the Mediterranean will serve to enrich the variety available to the airport’s passengers for their summer holidays, while opening another route to the London market will offer substantial possibilities for the region and the greater Southwest of the UK.

At a press conference, Sam O’Dwyer, Managing Director, Cornwall Airport Newquay commented: “We welcome Eddie Wilson and his team to Cornwall today and are delighted by their decision to add three new routes from Newquay for next year. We are committed to offering more options and choice for those wanting to travel to and from Cornwall. Malaga, in particular, is undoubtedly going to be a very popular addition to our network.”

Ryanair DAC, CEO, Eddie Wilson said: “As Europe’s and the UK’s most reliable airline, Ryanair is delighted to announce growth for our continued operations to/from Cornwall Airport Newquay with our Summer’23 schedule offering over 25 weekly flights on 5 routes, including 3 new routes to Dublin, London, and Malaga. Ryanair is pleased to be a part of the recovery of local tourism by supporting 40 local jobs and delivering tourists to county Cornwall year-round.”

Operating over 25 weekly flights during S23, Ryanair’s new links mark almost a 60% growth in the ULCC’s services from NQY, as they join established connections to Faro and Alicante.