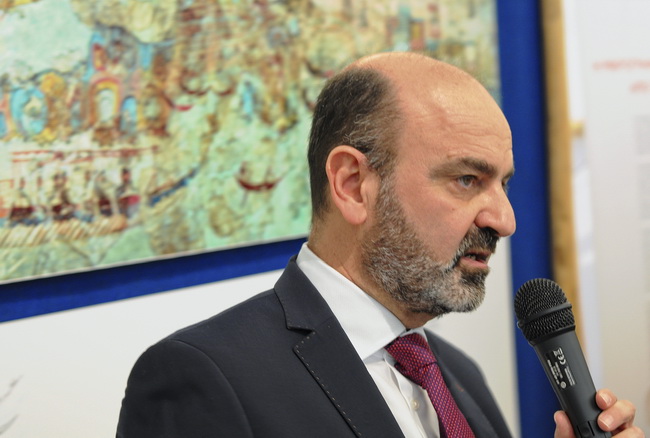 Dr. Diamantis Panagiotopoulos explains the nautical exhibits to visitors at the Archaeological Museum of Mesara.

The Archaeological Museum of Mesara offers a window into what this region of Crete was like throughout antiquity.

On January 25th, Crete’s Governor Stavros Arnaoutakis was joined by a large group of archaeologists, government officials, and a throng of visitors for the debut opening of the new Archaeological Museum of Mesara in Gortys. The museum opened with the temporary exhibition “Islands of the Winds” exhibition, which conveys the rich nautical culture of the prehistoric Aegean via 3D modeling, digital interactives, and displays of priceless Bronze Age artifacts.

Organized by the Ephorate of Antiquities of Heraklion and the Institute of Classical Archaeology of the University of Heidelberg in cooperation with the Region of Crete, the Archaeological Museum of Mesara offers a window into what this region of Crete was like throughout antiquity. The opening exhibit touches one of Crete island’s most important technical-cultural facets, the nautical traditions that helped the ancient Minoans prosper for so many hundreds of years. The relatively small exhibition tells a linear story of ancient seafaring, shipbuilding, and trade through beautiful crafted 3D models depicting Minoan Civilization maritime power.

Dr. Diamantis Panagiotopoulos, the distinguished Director of the Institute of Classical Archaeology of the University of Heidelberg, greeted the crowd first, before guiding onlookers through the exhibit. The archaeologist also discussed how the museum exhibit lays out in intricate detail the geographical background, social and economic conditions, administrative organization, and especially the technological progress the Minoans carried out in their shipbuilding sector. Dr. Panagiotopoulos had this to say about the purpose of the exhibition before the official opening ceremonies:

"A key objective of this exhibit is to go beyond the more narrow framework and purely archaeological approach, to present a more comprehensive and easily understood display of navigation in the Aegean in the 3rd and 2nd millennium B.C.”

The most impressive aspect of the new exhibit for most of the crowd was the use of intricate models that convey the reality of Bronze Age navigation and seafaring. The beautiful models of Minoan vessels and the shipbuilding yards at Kommos and other centers were the hit of the exhibition, as far as we could see. And the new museum seems to convey, perhaps for the first time, just how crucial Minoan maritime prowess was to the ancient world and the people of Crete.

The nautical exhibit runs from today, January 26th until August 31st of 2020, when another traveling exhibition will take its place among the permanent exhibitions at the almost 3,000 square meter facility.

Phil is a prolific technology, travel, and news journalist and editor. An engineer by trade, he is a partner in one of Europe’s leading PR and digital marketing firms, Pamil Visions PR.

He’s also a Huffington Post contributor on many topics, a travel and tech writer for The Epoch Times in print and online, and for several magazines including Luxurious.

Phil also contributes regularly to TravelDailyNews, The official Visit Greece Blog, and is an analyst for Russia Today and other media.

His firm has done all the content for Time Magazine’s top travel site Stay.com, as well as other online travel portals such as Vinivi out of France. He’s also a very influential evangelist of social media and new digital business, with a network of some of the most notable business people therein.

Chinese outbound tourism and the Coronavirus outbreak in China