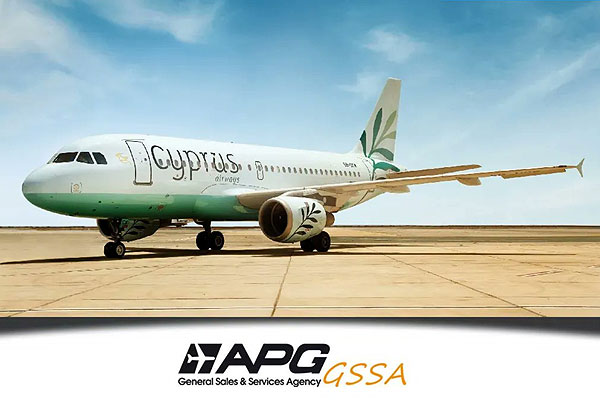 Cyprus Airways, national flag carrier of Cyprus, based at Larnaca International Airport, has chosen APG as its General Sales Agent (GSA) in France for the launch of its new service from Paris to Larnaca. Under the agreement APG will be providing the airline with sales development activities, wide ranging marketing support, as well as reservation and ticketing services.

Cyprus Airways is launching the new route between Paris and Larnaca on 21st of December 2022 as part of its international expansion. The service will operate twice weekly with an Airbus A320 offering 180 Economy Class seats.

Richard Burgess, President, APG Network said ”We are delighted to be working with Cyprus Airways in France and being part of the airline’s exciting growth strategy. With tourism to Cyprus continuing to return strongly after the pandemic, there are great opportunities to develop long-term trade support for Cyprus Airways in the French market.”

Paul Sies, CEO, Cyprus Airways said: "We are excited to launch Paris double weekly flights and we are confident APG Network will support us in making this route a strong contributor to our long-term mission to establish Cyprus Airways as stable flag carrier, contributing to growing the Island’s inbound tourism and broadening the horizon for local travellers."

Can electric bikes be used in the rain