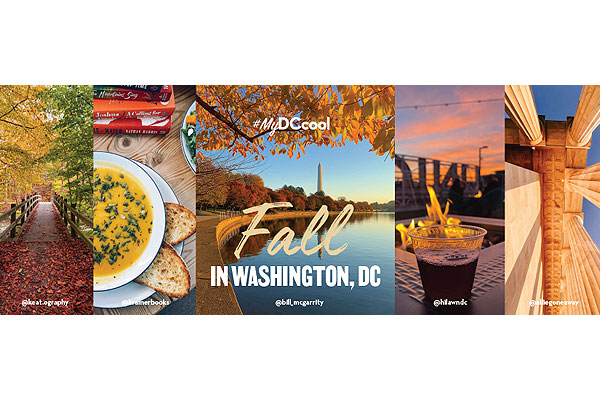 Meeting with purpose in the Connected Capital adds value and enhances programs.

WASHINGTON, DC – Destination DC (DDC), the official destination marketing organization for Washington, DC, at IMEX America announced efforts to attract meetings and conventions to the nation’s capital. Elliott L. Ferguson, II, president and CEO of DDC, outlined new developments and attractions for meetings planners. Melissa A. Riley, vice president of convention sales and services, shared the strengths of the city as a gathering place to meet with purpose and impact issues.

“Our role as an economic development organization is to be aggressive in attracting more international conventions and meetings, which benefit from DC’s thriving industries and intellectual capital,” said Ferguson. “Strong leisure destinations lead to strong meetings destinations, so as more people combine business and leisure travel, DC is notable for new investment, hotels, arts and culture, dining and nightlife and free things to do.”

“We’re thinking about what will make the difference for an organization.,” said Riley. “In Washington, DC, our positioning focuses on offerings that you can’t find anywhere else, so a potential delegate sees the value and purpose of attending. Our clients are meeting with leaders, offering top speakers and finding a voice for the issues they care about in DC.”

Development News
There are more than 26 new hotels or renovations in the pipeline, adding over 5,892 new or renovated rooms in eight neighborhoods. Additionally, the National Gallery of Art’s East Building reopened in June; the Kennedy Center opened an interactive permanent exhibit dedicated to President John F. Kennedy (Sept. 17); phase two of the Wharf opens bringing a new Pendry hotel and fine dining (October); the Smithsonian National Air and Space Museum reopens with eight new galleries (Oct. 14) and the Hirshhorn Museum and Sculpture Garden breaks ground on its Sculpture Garden renovation (Nov. 16). In fall 2023, the National Museum of Women in the Arts reopens after a major renovation. The nearly completed Metrorail Silver Line connects Washington Dulles International Airport to downtown DC. The airport will add a LEED Silver certified, $675 million concourse in 2026.

DC’s Convention Outlook
In 2022, there are 19 citywide conventions (defined as meetings bringing 2,500 room nights to the city on peak), with an estimated 394,000 room nights and an estimated economic impact of more than $265,000,000. In 2023 and 2024, the city expects to welcome 18 and 20 citywides, respectively. The team’s Connected positioning makes it easy for customers to understand how to hold more purposeful meetings in DC. The Connected messaging is reiterated throughout editorial marketing opportunities with partnerships and trade publications. The city’s assets facilitate content and exclusive benefits to make conventions successful. With a shorter booking window, DDC is growing corporate business opportunities to help fill hotels during need periods. DDC will also maximize the city’s sustainability offerings to attract groups.

Destination DC announces record 22.8m. visitors to the US capital in 2017