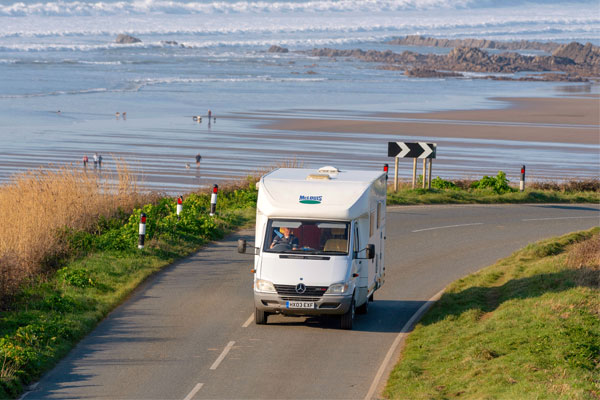 Predicted rise in UK road trips and travel suggestions for later this summer.

LONDON – Tourism is starting to pick up locally in many European countries where restrictions have been lifted and the virus is now almost under control. The new travel norm suggests a shift from hotels to independent rentals and flying to driving. Accompanying this trend, there is a boom in bookings in the campervan hire and motorhome industry, especially affecting domestic travelling.

A Longwoods survey found that 82% of people travelling in 2020 made changes to their travel plans due to COVID-19. Of these changes, 50% cancelled their trips completely, 22% changed their travel from flying to driving and 11% changed from international trips to domestic travel.

As domestic travel regulations have recently been lifted across most European countries, similar trends in domestic road trip holidays are predicted for the UK once travel restrictions ease in June and July. “As an example, our British and German clients used to stand out as they had more than 90% of bookings overseas. However, for the month of May, after Germany removed travel restrictions, over 84% of our large number of German bookings are domestic. We expect similar patterns in the UK once the country opens up later this summer”, says Hugo Olivera. "This trend is already starting to show in the UK, as Indie Campers see a 23% increase in UK domestic bookings compared to last year, and the share of domestic bookings have increased 294% year-on-year in the UK.”

The trend shows that people are choosing more independent travel options as these are more sanitary and isolated, and as it limits human contact and provides the flexibility to be independent.

Planning ahead for sunnier days in the UK later this summer may seem less nerve-racking than it did at the start of the pandemic. On this note, Indie Campers have put together some suggestions to keep dreaming of some great domestic road trips:

Snake Pass and Winnats Pass in Peak District, England
Head to Peak District and make sure to drive through the scenic and protected green valley of Winnats Pass. Make your way through Hope Valley and consider walking up to Stanage Edge, before heading into A57 and the legendary Snake Pass in Derbyshire. The pass with tight corners and twits is not only a great drive but is rewarded with views of the National Trust’s High Peak Estate. Suggested campsites: Castleton Caravan Club Site; Crowden.

Atlantic Highway, South West England
From the border of Devon through Cornwall, the A39 is repeatedly named one of the best road trips in the UK. The route takes you through small idyllic villages, green countryside and iconic coastlines. Indie Campers suggest taking some small detours to explore sites like the Bude Sea Pool and Widemouth Bay, a coastal walk in Trevose Head, and spend some time in the idyllic Cornish surf town Newquay. Please note that camping outside allocated sites is illegal in Cornwall. Indie Campers suggest to check out the following campsites: Crackington Campsite; Lower Pennycrocker; Porth Beach

Land of the Lakes, Lake District
Designated a UNESCO World Heritage Site in 2017, Lakelands’ unique landscape offers lots of walking routes, hiking, and kayaking or stand-up paddleboarding options along the road. Depending on how much you want to see, either take the ultimate round trip to cover most of the attractions and sceneries or break it up for a weekend getaway. Indie Campers advice on driving the Kirkstone Pass from Windermere to Ullswater, visit Grasmere and hike up Helvellyn. Suggested campsites in the Lakes: Low Wray Campsite, Syke Farm Campsite

Best of the Moors, Yorkshire
The North York Moors are arguably made for road trips. A great starting point would be this 90-mile road trip that encompasses hidden dales, bleak tops, steep passes through iconic valleys, and small coastal villages. Make sure to stop and grab some fish and chips in Whitby. Try to make time for a walk to the Mallyan Spout waterfall and a detour to the small fishing village of Robin Hoods Bay. Suggested campsites in North York Moors: Folly Gardens; Runswick Bay Caravan & Camping Park; Dalby Forest Caravan & Camping

Snow Roads Scenic Route, Scotland
Britain's highest public road is a 90-mile drive in the heart of Cairngorms National Park in the Scottish Highlands and takes you through iconic Cairnwell pass, castles, small whiskey distilleries and includes several viewpoints. The road has stunning nature and hidden gems such as the Linn of Quoich and Glas Allt Waterfall. Look out for the new viewpoint installations by award-winning architects near the Devil’s Elbow in Glenshee, Corgarff and Tomintoul. Campsite suggestions: Braemar Caravan Park & Camping Pods; Cairngorms Camping; Glenmore Campsite

Indie Campers is Europe's leading campervan rental company. The company currently has a fleet of more than 850 campervans in over 40 locations across The United Kingdom, Ireland, Portugal, Iceland, Spain, France, Italy, Switzerland, Germany, The Netherlands, Croatia, Belgium, Austria and the Mediterranean islands of Corsica, Sardinia and Sicily. Campervans can be picked off and dropped off in different locations and include 24/7 support and roadside assistance to give the ultimate road trip experience. Rentals also include a cooler or fridge, cleaning kit and air conditioning. At an optional cost extra, you can add bedding and kitchen kit, airport transfer, bikes, outdoor furniture, surfboards, wetsuits, BBQs and more. Indie Campers already have clients from more than 130 nationalities who have spent more than 200,000 nights in campervans.