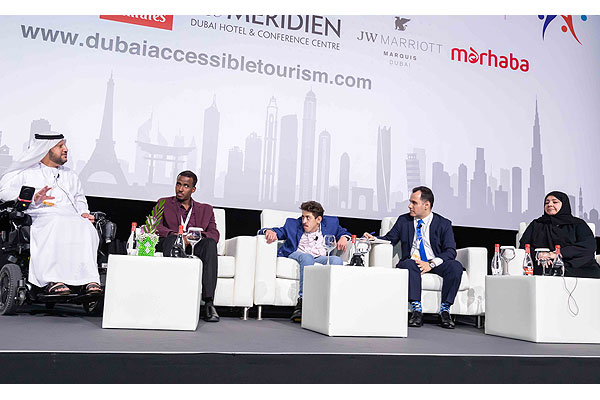 A panel representing People of Determination discussing about the challenges they face when traveling during the 1st edition of DATIS.

DUBAi, UAE – His Highness Sheikh Ahmed bin Saeed Al Maktoum, President of Dubai Civil Aviation Authority, Chairman of Dubai Airports and Chairman and Chief Executive of Emirates Airline and Group, has asserted that the Dubai Accessible Tourism International Summit (DATIS) is a qualitative addition to the international efforts aimed at making the world better and more accessible to tourists from within the ranks of People of Determination. He indicated that the 1st edition of the Summit has managed to attract international officials and experts who highlighted the rights of millions of People of Determination in travel and tourism domains and the challenges they face moving from one city to another.

“We have taken the initiative and taken important steps on the way to achieving our goal of making Dubai one of the most prominent leading tourist destinations preferred by People of Determination. However, we will not rest on our laurels, but will rather move forward, in coordination with government and private entities and international organizations, to enhance the UAE’s competitiveness in this field,” said Sheikh Ahmed bin Saeed, Patron of the Summit.

He added: “The Summit has come out with a number of recommendations covering the most important challenges that People of Determination face during travelling between the cities of the world. We will work to implement those that are suitable and translate them into a tangible practical reality with the aim to upgrade the quality of the services we provide to our visitors, while making their visit to Dubai a pleasurable and easy experience.”

His Highness made the statements on the occasion of the announcement about the second edition of the Summit which will take place from 10-11 November 2020 at the Dubai World Trade Centre (DWTC).

According to the World Health Organization (WHO), the number of people who need some kind of assistance amounts to one billion people, who are served by another one billion, hence making this segment accounts for 1/3 of the world population. The total number of tourists with disabilities amounts to 120 million out of a total of 1.2 billion tourists around the world in 2017. These tourists have spent billions of dollars and millions of tourist overnights.

The Dubai Accessible Tourism International Summit (DATIS) aims to mobilize the largest gathering of local and international officials to delve into issues dealing with the rights of People of Determination with regards to tourism and travel, and the importance of enhancing collaboration to have all cities of the world become friendlier for People of Determination as part of strategic plans implemented on phases to ultimately reach the objective of making all cities of the world better accessible to this beloved segment that accounts for 10-15% of the total international community.

Dubai is relentlessly moving to achieve its vision of becoming friendly to People of Determination as all related authorities in the Emirate are working to reach this objective through implementing relevant laws and legislations, in addition to adapting smart solutions to provide the best of services to this segment, especially as Dubai is gearing up to receive 25 million tourists a year by 2025.

The 2nd edition of Summit will have a number of speakers, including decision-makers, senior officials of concerned international organizations and experts from within the ranks of People of Determination, who will discuss very important issues, including strategies and policies; the importance of global design of cities and how to transform them into cities accessible to all.
They will also debate whether it is possible to achieve a comfortable living environment for People of Determination; how to ensure freedom of movement in various modes of air, land and sea transport to millions of tourists around the world; and how to reach new horizons on the level of services directed to People of Determination. In addition, the Summit will discuss other important topics, including the importance of technology in changing the lives of People of Determination and enabling them to better travel between destinations, and the role of data provided by websites in facilitating the task of choosing friendly destinations.

According to a WHO report, the number of people who need assistive devices ranging from wheelchairs to telecommunication technologies will double from one billion at present to two billion by 2050 as a result of aging, health problems, crises, poverty and other factors.