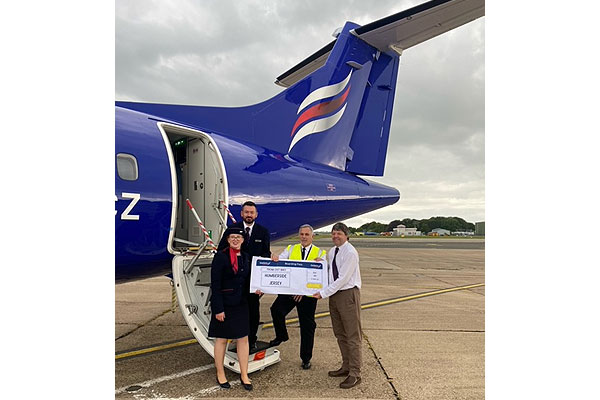 The UK’s regional airline will operate the service weekly on one of its fleet of ATR72 aircraft, offering one of the lowest fuel-burn and emissions in the market today.

Eastern Airways, the UK’s regional airline and based at Humberside Airport, are this weekend launching their Summer 2022 service to Jersey in the Channel Islands, commencing with direct flights on Saturday 21 st May from both Humberside Airport and also Teesside Airport.

The weekly Saturday service, bookable at easternairways.com will offer a longer season for 2022 with flights commencing in May through until late September, buoyed by increased UK staycation demand to destinations such as the Channel Islands. Operated in partnership with CI Travel Group and Premier Holidays, the service from Eastern Airways home base will complement the Aberdeen service that has operated continuously for 25-years from the Humber region airport since 1997 and also the Newquay service launched last month.

2022 also represents a great milestone for Eastern Airways at Teesside Airport having now been operating from the North-East of England Airport for 21 consecutive years showing our underlying support for the airport over many years.

Roger Hage, General Manager of Eastern Airways said: “Given the UK staycation growth remains the focus for many into 2022; we have extended the length of the operating season to this popular Channel Island destination of Jersey from both Humberside and Teesside Airports in conjunction with our primary partners of C.I. Travel Group and Premier Travel. As passenger confidence increases again, we want to ensure the right services are being offered given Eastern Airways is all about supporting the regions of the UK, connecting people and places, so growing Jersey capacity will offer a welcome UK break destination from Humberside and Teesside.

“Given recent new network additions from Humberside to Cornwall Airport Newquay adding to our 25-yers of serving Aberdeen, we are also delighted to be back at Teesside for the 21st year consecutively, highlighting how as the UK’s regional airline, we support those vital smaller regional airports through thick and thin in maintaining their role in the local and regional communities they serve. Regional services are vital in restoring and adding increased connectivity and aiding economic recovery where sustainable.”

Deborah Zost, managing director, Humberside Airport said:  “Its superb news for the region that Eastern Airways has continued the now well-established service from Humberside to Jersey, in the Channel Islands.

“We are confident our customers will welcome the opportunity to once again enjoy the beautiful island of Jersey and all that it has to offer, with the ease of traveling from their local airport – further supporting the local and UK economies."

Robert Mackenzie, Managing Director, CI Travel Group said: “C. I. Travel Group is delighted to be partnering once again with Eastern Airways to operate a direct flight from Humberside to the holiday island of Jersey this summer. We are really looking forward to welcoming clients, old and new, to Jersey in 2022.”

The UK’s regional airline will operate the service weekly on one of its fleet of ATR72 aircraft, offering one of the lowest fuel-burn and emissions in the market today. Operating from 21st May until 1st October, with fares including taxes and charges and 15kg checked baggage as standard.

East Midlands to Newquay flights to start with Eastern Airways