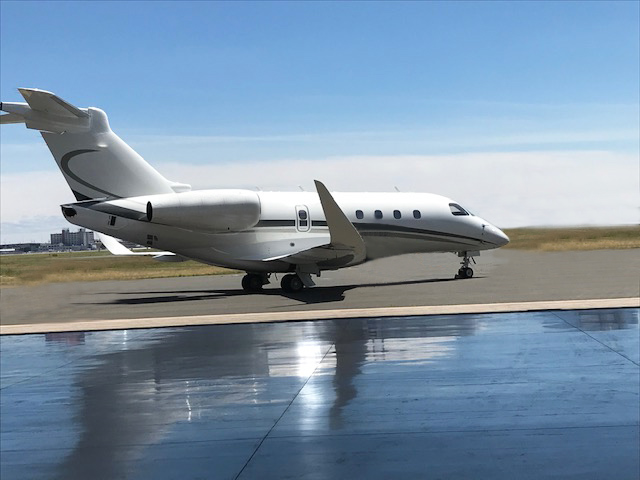 In order to generate the impressive range improvements synonymous with the Praetor 500, the level-sensing wiring in the fuel tanks were replaced, the over-wing gravity fueling ports were moved, the fuel-measurement system was relocated, and the wing ribs were reinforced to hold additional weight.

MELBOURNE, FLORIDA – Embraer Services & Support announced the completion of the first conversion of a Legacy 450 to a Praetor 500 for an undisclosed customer. The conversion was performed at the Embraer Executive Jets Service Center at Bradley International Airport in Windsor Locks, Connecticut.

“Embraer-owned Service Centers are well prepared with parts kits and skilled labor and are ready to bring the most disruptive and technologically advanced midsize business jet ever made, the Praetor 500, to our existing Legacy 450 customers, with the company’s primary vision of delivering the ultimate customer experience,” said Johann Bordais, President & CEO, Embraer Service & Support. “This conversion makes a great airplane even more industry leading.”

In order to generate the impressive range improvements synonymous with the Praetor 500, the level-sensing wiring in the fuel tanks were replaced, the over-wing gravity fueling ports were moved, the fuel-measurement system was relocated, and the wing ribs were reinforced to hold additional weight. These adjustments entailed updates to the flight control systems, including a new avionics load for the acclaimed Collins Aerospace Pro Line Fusion flight deck. Most noticeably, the iconic swept winglets of the Praetor were installed, and the placards and logos were replaced to officially convert the Legacy 450 into a Praetor 500. The conversion was made possible by the expertise of structures and avionics specialists, A&P mechanics, logistics teams, and engineers from Embraer operations around the globe.

With the Praetor 500 comes an unparalleled blend of technology, comfort, and performance. In terms of technology, the Praetor 500 features the industry-first E2VS – a head-up display that combines synthetic and enhanced vision. Plus, it’s the only midsize business jet with full fly-by-wire flight controls and turbulence reduction capability. Comfort abounds in the Praetor 500 cabin as it’s the only midsize business jet to feature a true six-foot-tall, flat-floor cabin, stone flooring, a wet galley, and a vacuum lavatory – all with best-in-class baggage space. As for performance, the conversion to a Praetor 500 entails an intercontinental range of 3,340 nautical miles (6,186 km) with four passengers and NBAA IFR Reserves.