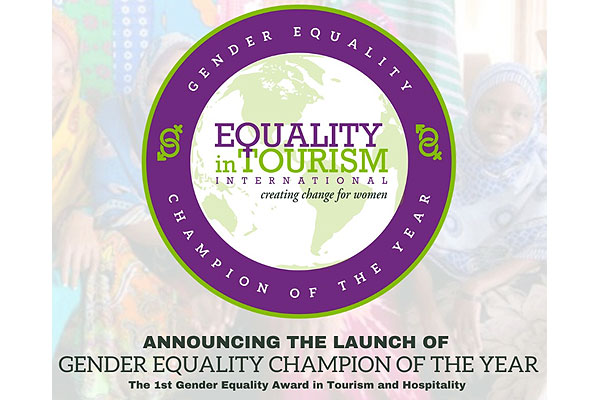 Equality in Tourism believes that the sector must address gender equality in the workplace and reward and highlight best practice for replication and development across the industry.

LONDON – Equality in Tourism has launched the Gender Equality Champion of the Year award, the first honour of its kind in the tourism sector.

The new award recognises tourism organisations that display excellence in their commitment to gender equality. It aims to celebrate success but also drive improvement, encouraging tourism businesses to integrate gender equality into policies and work practices.

The global tourism workforce comprises 53% women, according to a 2019 report by UNWTO. Equality in Tourism believes that the sector must address gender equality in the workplace and reward and highlight best practice for replication and development across the industry.

Applications for the new award are welcome from any tourism or hospitality organisation committed to gender equality. The award will be judged by a panel of leading gender and tourism experts, including Dr Stroma Cole, reader in tourism at the University of Westminster and director of Equality in Tourism, Maud Kumbirayi Masiyiwa, a training and development consultant for small and medium-sized tourism businesses in Africa, and Dr Lucy Ferguson, senior consultant and researcher in gender training and gender mainstreaming.

The award will be presented on 7 March 2023 at ITB Berlin, the world’s largest tourism trade fair.

Dr Cole said: “Structural barriers, patriarchal norms, and an inequitable global system in the tourism and hospitality industries cannot be addressed with an award. But this award will take an important step to push for change. There is no such thing as sustainable tourism
without gender equality.”

Applications should be made by 17 January 2023.