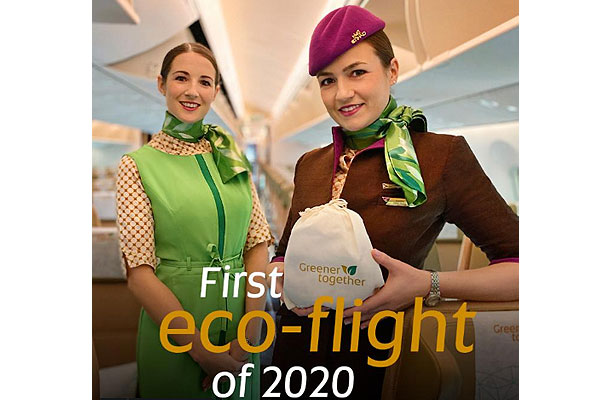 At the core of its commitment to sustainable flying, Etihad Airways continues to invest in the latest generation, most fuel-efficient aircraft, increasing its fleet of Boeing 787 Dreamliners and preparing to induct three new types, the wide-bodied Airbus 350-1000 and Boeing 777-9, and the narrow-bodied Airbus A321neo.

Etihad Airways operated a special ‘eco-flight’ from Abu Dhabi to Brussels, featuring a range of initiatives designed to illustrate the airline’s broad commitment to sustainable practices in the air and on the ground.

Flight EY 57, which arrived in Brussels shortly before 7.00am, was operated with a Boeing 787 Dreamliner aircraft, the newest and most efficient type in the Etihad fleet, which consumes at least 15 per cent less fuel than any aircraft type previously flown by the airline.

The aircraft followed an optimised flight route facilitated by the European air navigation service provider Eurocontrol to help reduce fuel consumption and carbon emissions. A range of other initiatives were also undertaken before, during and after the flight including fuel optimisation measures and other actions in collaboration with partners including Brussels Airport and a range of cabin service suppliers to highlight incremental opportunities to reduce the airline’s impact on the environment.
Today’s flight was timed to coincide with the start of Abu Dhabi Sustainability Week, an annual event held in the UAE capital to highlight sustainable initiatives across a broad range of areas.

The Group Chief Executive Officer of Etihad Aviation Group, Tony Douglas, said: “Sustainable practice is a critical and continuing challenge for the air transport industry, which is striving to reduce carbon emissions and waste, while meeting soaring demand for air travel. It is also a key priority of the Emirate of Abu Dhabi, in which Etihad is a critical driver of both social and economic development."

“This year’s national theme of the United Arab Emirates is ‘2020: Towards the next 50’. Etihad is committed to working continuously with a range of partners as part of a broader national focus on environmental sustainability.”

At the core of its commitment to sustainable flying, Etihad Airways continues to invest in the latest generation, most fuel-efficient aircraft, increasing its fleet of Boeing 787 Dreamliners and preparing to induct three new types, the wide-bodied Airbus 350-1000 and Boeing 777-9, and the narrow-bodied Airbus A321neo.

Etihad Airways recently partnered with First Abu Dhabi Bank and Abu Dhabi Global Markets to become the first airline to secure commercial funding conditional upon   compliance with the Sustainable Development Goals of the United Nations and is exploring options for similar funding of other initiatives.

The airline has announced the Etihad Greenliner Programme, through which its entire fleet of Boeing 787s will be used as flying testbeds for a range of sustainability initiatives by Etihad and its industry partners. The first such partner is Boeing, which will join Etihad in a comprehensive research programme, beginning next week with delivery of a new ‘signature’ Boeing 787, specially-themed to highlight the sustainability partnership of the two companies.

Brussels Airport is ‘climate neutral’ in its own carbon emissions through extensive initiatives including the use of electric buses for passenger transport and compressed natural gas for its own service vehicles, and is exploring options including the use of electric vehicles for aircraft push-back and taxi-out.
Etihad is also implementing or considering sustainability initiatives including: