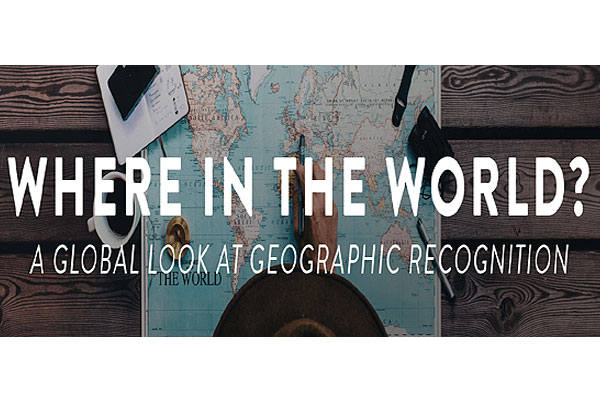 No matter where the respondents travelled on the map, Europeans were universally more apt at identifying world countries than Americans.

Humanity has come a very long way from its mapping methods of yore: medieval globes that placed Jerusalem at the centre of our world, images of terrain carved into wooden blocks and copper plates during the Renaissance, and of course, blowing the lid off cartographic accuracy using aerial photography during World War I.

Now that any individual with a smartphone (over 2.5 billion people and counting) is walking around with an infinitely detailed world map in his or her pocket, one would assume that we've never been more familiar with world geography. Forget "Around the World in Eighty Days" – we can pull out our phones and digitally trot the globe in 80 seconds!

As it turns out, this ability may actually be hurting us instead of helping us. Relying on tools like GPS can actually diminish our sense of direction, like when a muscle atrophies from underuse. One study revealed that hikers who were asked to retrace their steps had much more success when they were given a paper map, as opposed to GPS-style, step-by-step instructions.

In an age of unparallelled access to maps and a striking reliance on technology, holidaycottages.co.uk wanted to explore how well people really know the world and its borders. In a survey of over 1,000 people, they asked Americans to point out European countries on a map and vice versa. Both groups were also asked to identify various other countries across the globe. Here's how they did.

Asking someone to locate a country on a map yields data that are so much more than "did they know where it was?" We also wanted to know where people pointed to when they misidentified a given location.

Venezuela, a country that was recognised by less than half of both surveyed populations, was at least able to keep errant guessers inside the continent's borders. Bolivia was the country most commonly confused for Venezuela, followed by Colombia, Peru, and Argentina. And while Brazil was accurately pointed out by nearly all of our respondents, some bold guessers placed this country inside of India, Algeria, and even Kazakhstan.

Nigeria – a country that was recognised by approximately half of Europeans and less than 40 percent of Americans – was frequently misidentified as a host of South American countries by Americans in particular (though the majority of inaccurate guesses still placed it within Africa).

No matter where the respondents travelled on the map, Europeans were universally more apt at identifying world countries than Americans.

Out of all the locations we asked people to point out, China was the most frequently recognised of all. China also brought Americans closer than ever to winning this international battle of wits, with 84.6 percent correctly identifying this Asian location. However, Europeans beat them by a hair at 88.7 percent.

In other cases, the gap was much more pronounced. Just 28.2 percent of Americans were able to point to Syria on a map – the same country that is currently home to approximately 2,000 U.S. soldiers. In comparison, 43.7 percent of Europeans knew where Syria was.

Venezuela – a country currently teetering on the edge of civil war – was correctly identified by under half of both demographics' respondents. On the other hand, Brazil, India, and Japan were recognised by the grand majority of Europeans and Americans alike.

In 2016, the U.S. welcomed 4.6 million British and 2 million German tourists – not to mention the millions of other European visitors from a host of other countries. With so many Europeans touching down on American soil, we wanted to know how well the population at large knew U.S. geography.

States that receive a high volume of tourists every year – think Florida and California – were pinpointed fairly accurately by our European respondents. More than 76 percent of Europeans identified the Sunshine State correctly, and nearly 80 percent were able to spot California.

States closer to the centre of the country, however, gave Europeans a run for their money: Locations like Colorado, Kentucky, and Wyoming yielded guesses from coast to coast, with less than 35 percent of respondents accurately identifying each one.

Although New York City has no shortage of European tourists walking its streets every year, only 29.6 percent were able to pinpoint the state on a map. Instead, it was guessed to be all along the Northeastern Seaboard, with a smattering of people placing it somewhere in the Midwest.

The top five places to spot wildlife in the UK

Holidaycottages.co.uk partners with iNews to launch the Staycation Awards 2019

Prepare your budgets: This is the largest expense while traveling abroad