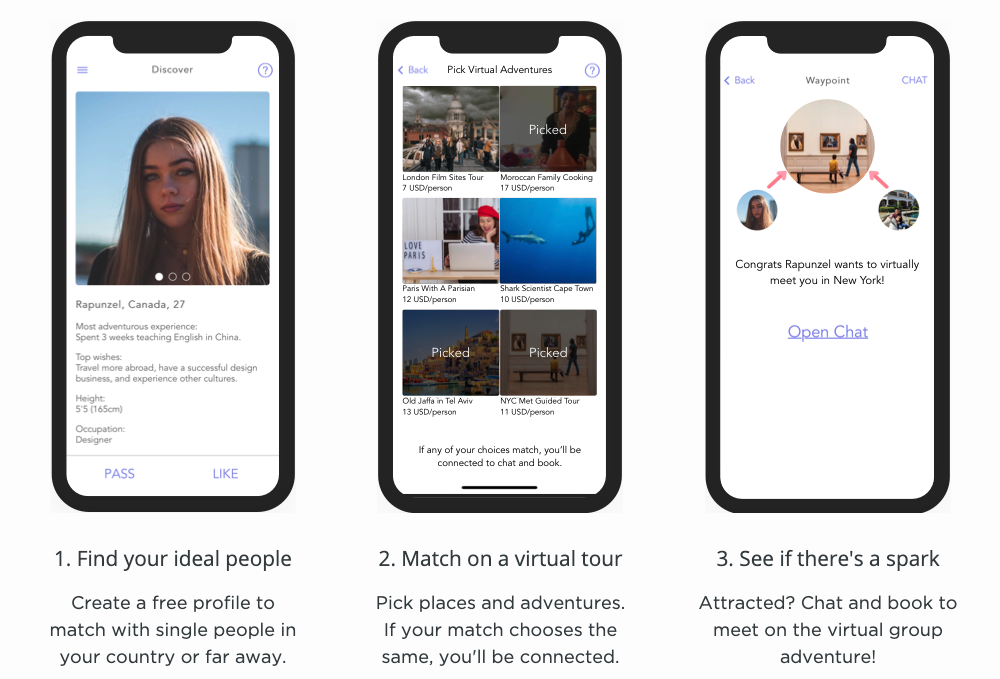 SF startup is looking to help millions of singles connect and build relationships through matching and going on virtual adventures using its dating app.

SAN FRANSISCO, CA. – Fairytrail is the first dating app to offer its users the ability to match and go on virtual adventures powered by Airbnb and Viator, a Tripadvisor company.

With travel restrictions and shelter-in-place, nearly half of Americans report that the coronavirus crisis is affecting their mental health. And an alarming projection from the national public health group Well Being Trust estimates that 75,000 Americans could die from drug or alcohol misuse and suicide related to COVID-19. “You’re having feelings of isolation and loneliness like you’ve never had before,” says psychologist Dr. Kevin Gilliland.

Both the team at Fairytrail and its users have been feeling the pain too. “All I do is watch movies and video chat. I want to change it up because I feel like I’m going crazy,” one employee reports.

After conducting research, Fairytrail found evidence that virtual adventures with someone you like can reduce the feeling of isolation and desperation in this unprecedented time.

“Since traveling is impossible now, this is how we can take some travel magic and bring it into our lives: These virtual adventures allow us to learn new things, meet people from different cultures, and experience something live and fun with people we like.”

If you’ve never tried a virtual tour, you might enjoy it like this user: “This was my first ever virtual tour and I had no idea what to expect. It was essentially a super-interactive conference call with a super host. Lula was very energetic and knowledgeable guide. Although you are just sitting in front of your computer for the whole thing, he kept the experience very engaging and informative. Great value for money and a really nice way to spend an hour” said Mairt, Magic of Film Themed Virtual Tour of London (Rated 5 stars)

Hοw it works:
1. Single people make a free profile on Fairytrail and match with each other (just like on Tinder or Bumble).
2. Once users match, Fairytrail recommends different virtual tours to them from Viator and Airbnb based on their profiles. Users aren't able to talk at this stage. They simply choose the tours they like.
3. If there's overlap in the tours picked, Fairytrail connects the users to talk and show them the cheapest matched tour. They can message, video call, and even book the matched tour.