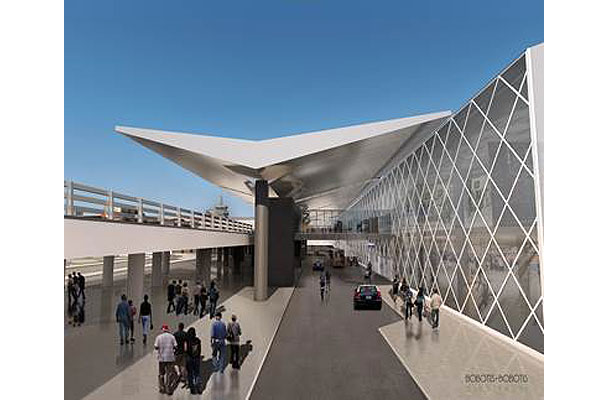 Along with the second terminal, this investment includes: refurbishing the existing terminal (total floor space of 24,000 sqm), constructing a new fire station, and upgrading the wast-water biological treatment unit as well as connecting it to the main city network.

Fraport Greece presented the future look of Thessaloniki’s “Makedonia” Airport (SKG) at a ground-breaking ceremony held September 19 on the site of the new 34,000-square-meter passenger terminal that will soon be standing here in the next two years. Representatives of central and local government, political parties, professional bodies, associations and other stakeholders from Thessaloniki and the greater Makedonia region attended this future-oriented event. On behalf of Fraport Greece, the guests were greeted by Fraport AG executive board chairman, Dr. Stefan Schulte; Dimitris Copelouzos, the president of Copelouzos Group; Petros Souretis, managing Director of Intrakat (the construction company tasked with the expansion program); and Fraport Greece’s CEO, Alexander Zinell.

Fraport Greece, a subsidiary of Fraport AG, is investing some 100 million euros in creating a “new era” at Greece’s second largest city. Along with the second terminal, this investment includes: refurbishing the existing terminal (total floor space of 24,000 sqm), constructing a new fire station, and upgrading the wast-water biological treatment unit as well as connecting it to the main city network. Other enhancements will increase operational capacity thanks to more check-in counters (up 47 percent), a doubling of the security lanes, additional baggage delivery belts (up 75 percent), and a 50-percent increase in the number of terminal gates.

At the same time, major upgrade works taking place elsewhere at the airport include reconstructing the runway and apron areas and installing a modern baggage handling and control system. Fraport Greece’s SKG development program, which is expected to be completed in the first quarter of 2021, will significantly increase capacity for a modern gateway to the city of Thessaloniki and its wider region.

Commenting on the Thessaloniki Airport expansion and the Greek regional airports, Fraport CEO Schulte said:  “Fraport is proud to present the new exciting vision of Thessaloniki Airport – our single largest infrastructure investment in Greece. Thessaloniki region has an amazing heritage and a dynamic future – which requires an airport fit for the future. Step by step, we are improving procedures, operations, services, connectivity and infrastructure. Our goal is to enhance the overall customer experience. We are highly committed. Together, with our partners and stakeholders, we are meeting the challenge – not only in Thessaloniki but also at the other regional airports.”

Fraport Greece CEO Alexander Zinell stressed the importance of the project for Thessaloniki and the Makedonia region, as well as for the entire country: “Today marks the dawn of a new growth era for Greece. There is no better place to start a new chapter than at this historic city. Thessaloniki's newly emerging airport represents much more than the €100 million construction project – out of Fraport Greece’s total 415 million euros infrastructure investment for all 14 regional airports. Quite simply, our goal is to completely transform Thessaloniki Airport into a modern hub for the southeastern Balkans.”