Fraport is critically reviewing its Russian investment day by day 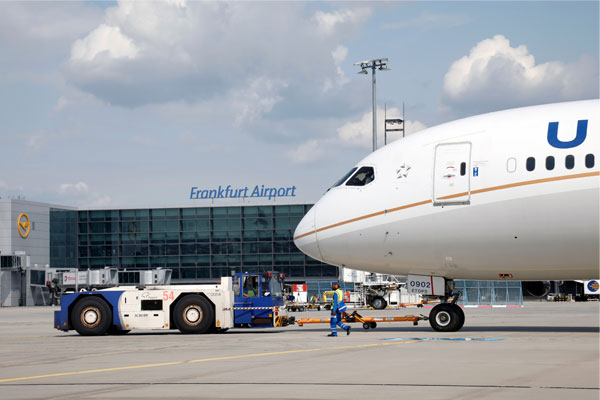 The Supervisory Board and company fully support sanctions aimed at the aggressor Russia. During the first three months of 2022 the Group’s operating result or EBITDA (earnings before interest, taxes, depreciation and amortization) grew even stronger by 75.9 percent to 70.7 million euros.

At a special meeting, Fraport AG’s Supervisory and Executive Boards dealt intensively with the company’s minority stake in the Pulkovo Airport operating company in St. Petersburg.

“The Supervisory Board and Executive Board of Fraport AG both agree that there is absolutely no justification for Russia's aggression. Russia must end this war immediately. We fully support the sanctions imposed on Russia. Therefore, Fraport has suspended its Russian business since the beginning of the war. The company derives no profit or other benefit from it. Fraport acted immediately and consistently,” explained the Hessian Minister of Finance and Supervisory Board Chairman Michael Boddenberg and CEO Dr. Stefan Schulte.

“The sanctions are rightly aimed at damaging the system of the aggressor Putin. The last thing that we want to do is to give the aggressor a three-digit million sum. We also have an obligation to preserve the assets for taxpayers and the other Fraport co-owners. The state government, as well as the executive and supervisory boards, have an asset management obligation. This also includes preventing the risk of possible claims for damages. All these aspects need to be taken into account. That is why our Russian investment is on ice. At the same time, we are not giving it away any assets to a war criminal. Fraport's investment in Russia is being critically reviewed on a daily basis – since the beginning of the war and onwards,” said Boddenberg.

"The fact is that when Russia began its war of aggression, we immediately suspended all services being provided under the concession. We remain steadfast," explained Schulte.

The Chairman of the Supervisory Board convened today's meeting in order to be able to jointly evaluate the available findings. Since the beginning of the war, there has been a close exchange with the company management regarding the stake in St. Petersburg. From the outset, Fraport and the Hesse state investment management also commissioned external legal experts. The state government also contacted the federal government on the question of the possible military use of Pulkovo Airport and asked for clarification. The federal government has not yet completed this.

“The situation is clear, if not satisfactory: Fraport currently cannot do anything more than suspend this investment. If there is solid evidence that Pulkovo Airport is also being used for the war against Ukraine, we have a new situation. This could also apply to future sanctions being imposed. Therefore, we are assessing the situation day by day. We will continue to act consistently for Fraport, our state and the shareholders. It is also clear what is not possible: acting without legal recourse, based on pure wishful thinking, or even leaving assets to the aggressor,” said Boddenberg.

CEO Schulte made it clear: “Neither Fraport as a minority shareholder nor the co-shareholders of the operating company have any influence on the type of flight movements at Pulkovo Airport. As at other airports, government agencies are responsible for this. In Germany, for example, this is the responsibility of the German air traffic control agency and the respective transport ministries of the federal states – and accordingly state agencies in Russia. We still have no indication that any armed military flights involved in the Ukraine war are being handled via Pulkovo. However, we cannot rule out flights for government officials.”

The Supervisory Board decided that its investment committee responsible for the company's holdings, headed by the former Hessian Minister of Economics Lothar Klemm, should deal intensively with Pulkovo and meet at frequent and regular intervals in the future in order to bundle all findings and be able to react quickly to current developments. The Supervisory Board will meet again soon to hear external experts commissioned by the company and the investment management.

Fraport Group Interim Release – First Quarter 2022: Key Operating Figures Improve Noticeably
During the first three months of 2022, Fraport AG’s business performance continued to be affected by the coronavirus pandemic, as well as the initial impact on aviation from Russia’s invasion of Ukraine. Nevertheless, the rebound in passenger demand in the reporting period boosted Group revenue by 40.2 percent year-on-year in the first quarter of 2022. The Group’s operating result or EBITDA (earnings before interest, taxes, depreciation and amortization) grew even stronger by 75.9 percent to 70.7 million euros. Due to one-off effects, the Group result (net profit) decreased to minus 118.2 million euros.

Fraport’s CEO, Dr. Stefan Schulte, stated: “Despite the omicron virus variant and new geopolitical uncertainties, a significantly higher number of people are traveling by air again. With passenger figures rising at our airports across the Group, the operating result improved significantly in the first quarter of 2022. For our home-base Frankfurt Airport, we remain optimistic because of the positive booking figures for the coming summer travel season. For the entire year, we expect to see between about 55 percent and 65 percent of pre-pandemic passenger volumes in Frankfurt. At the same time, the war in Ukraine is impacting our business as well – a war that we condemn in the strongest terms, as an unjustified attack on a sovereign state. One of the effects of this war are increasing prices, and we also are feeling the rise of inflation. Despite this, however, we continue to expect Fraport’s full-year business performance to be clearly positive. Therefore, we are maintaining our previously announced outlook.”

Traffic continues to recover
Although the spread of the coronavirus’ omicron variant still dampened passenger demand at many Group airports at the beginning of the year, the further lifting of travel restrictions largely supported ongoing passenger recovery across the Group during the first quarter of 2022. Frankfurt Airport served a total of 7.3 million passengers in the first three months of the year – an increase of more than 100 percent compared to the same period in 2021. In contrast, cargo throughput (comprising airfreight and airmail) slipped by 8 percent year-on-year to 511,155 metric tons. Factors contributing to this decline included China’s ongoing Covid-related lockdowns, as well as reduced airspace capacity resulting from the war in Ukraine. The airports in Fraport’s international portfolio sustained their rebound in the first quarter of 2022. Most of the Fraport Group airports outside Germany gained more than 100 percent in traffic year-on-year during the first quarter of 2022, with the exception of the two Brazilian airports (up 68 percent, overall), Antalya Airport in Turkey (up 82.5 percent) and Samos Airport in Greece (up 95.2 percent).

Key operating figures improve noticeably
Fraport’s Group revenue climbed by 40.2 percent year-on-year to 539.6 million euros in the first quarter of 2022. When adjusting for revenue from construction and expansion measures at Fraport’s subsidiaries worldwide (in line with IFRIC 12), Group revenue grew by 37.6 percent to 474.4 million euros. Buoyed by the rebound in passenger traffic, Fraport’s operating result (Group EBITDA) soared by 75.9 percent year-on-year to 70.7 million euros. Group EBIT also improved from minus 70.2 million euros in the first quarter of 2021 to minus 41.3 million euros in the reporting period. The financial result was affected by two diverse non-recurring effects from at-equity subsidiaries. On the one hand, the financial result was positively impacted by the upward revaluation of the Xi’an subsidiary (with an accretive effect of 20.0 million euros), following the agreed divestiture of Fraport’s 24.5 percent stake in Xi’an Airport. On the other hand, Fraport made a negative value adjustment of 48.2 million euros on a loan receivable from Thalita Trading Ltd. in connection with its minority-owned St. Petersburg subsidiary. This adjustment was mainly due to the increased default risk related to the loan. Reflecting both of these one-off effects, the Group result (net profit) dropped to minus €118.2 million.

Financial outlook: Fraport expects full-year 2022 to be clearly positive
After conclusion of the first quarter, Fraport’s executive board is maintaining its outlook for the current 2022 business year. In Frankfurt, Fraport expects to achieve a passenger volume of between about 39 million and 46 million for the full year 2022. This represents up to 65 percent of the passenger traffic seen at Germany’s largest aviation hub before the pandemic. Fraport’s majority-owned airports worldwide are expected to achieve even stronger dynamic growth. Group revenue is projected to reach some 3 billion euros in fiscal year 2022. Group EBITDA is forecast to range between about 760 million euros and 880 million euros. The Group result (net profit) is also expected to be clearly in positive territory, ranging between about 50 million euros and 150 million euros.

Earning miles at Frankfurt Airport: now even before departure