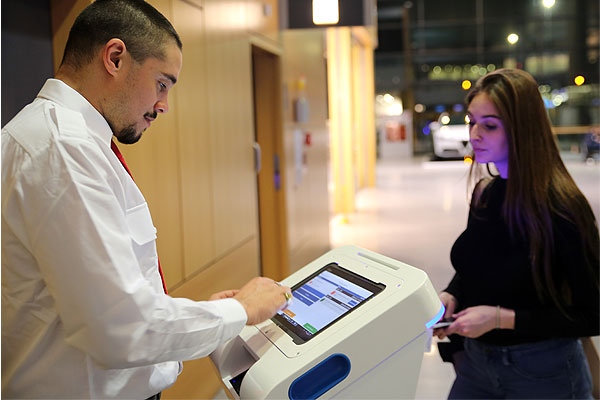 FLYSEC, an EU-funded consortium of eleven partners, including the University of Luxembourg and lux-Airport, spent three years developing the system, which they put through its paces in a final field-test at Luxembourg Airport.

LUXENBURG – The University of Luxembourg’s Interdisciplinary Centre for Security, Reliability and Trust (SnT), together with lux-Airport, has field-tested a hi-tech airport security system, paving the way for a future without random searches and lengthy queues.

A team of scientists, technicians and lux-Airport staff worked through the night to test the intelligent end-to-end system, which analyses a passenger’s onsite behaviour, travel history and booking profile to classify them according to their ‘trustworthiness’. It then funnels Passengers into different risk-based levels of security screening (Trusted, Normal and Enhanced Risk).

FLYSEC, an EU-funded consortium of eleven partners, including the University of Luxembourg and lux-Airport, spent three years developing the system, which they put through its paces in a final field-test at Luxembourg Airport. The team installed sophisticated sensors throughout the airport to track 100 actors – playing the role of passengers – as they made their way from landside to boarding, enacting different scenarios.

Within the system, airport staff benefit from a range of state-of-the-art technology. Smart kiosks verify travel documents and use Passenger Name Record data to identify unusual booking and travel profiles. Meanwhile, using movement pattern analysis, the system alerts staff to suspicious behaviour within the airport. A web platform brings all of this information together to provide holistic airport monitoring and scenario simulation, while mobile apps provide security staff with on-the-ground operational and incident support.

The FLYSEC team built their system on the principal of security as customer service – a departure from current methods, where increased security comes at the expense of passenger comfort. Most importantly, it spells the end for long queues and intrusive security measures that result in passenger dissatisfaction and escalating costs. Further, a mobile application guides passengers through check-in, security and boarding, minimising their time spent at the airport.

SnT researcher Aurel Machalek emphasised the importance of being able to screen passengers objectively. “Because the analysis is based on raw data, and disregards things like skin colour or religious symbols, our process is not only more efficient but also ethical by design. It’s a technical solution, because it brings a lot of new technology and data to airport security, but also a human one, because it improves the experience for both passengers and staff.”

Daniel Conrardy, Head of Airport Security at lux-Airport, was proud of the organisation’s role in identifying solutions to the pressing issue of airport security. “Being a small Airport in one of the smallest countries in Europe, I am proud that lux-Airport was chosen to participate in this challenging FLYSEC project. It was a great experience for myself and for my whole team.”

With global passenger numbers set to reach 8 billion per year by 2036, authorities agree that current passenger security models are unsustainable. FLYSEC’s solution, which is ready for real implementation, shows that raising security and improving the passenger experience can go hand in hand.

TownePlace Suites by Marriott to open in Baytown, Texas