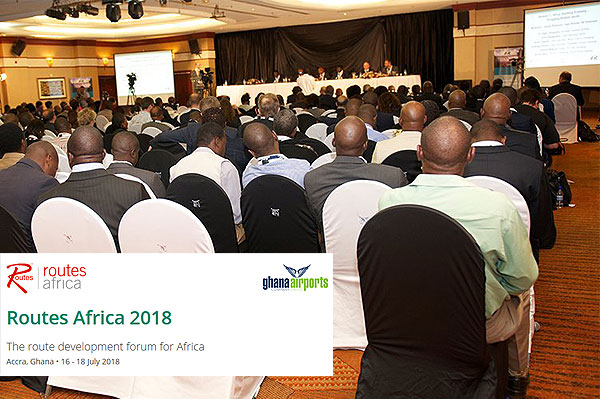 This year’s event will be held in Accra, Ghana from 16-18 July and hosted by Ghana Airports Company Limited (GACL).

Routes Africa, the intra-Africa route development forum, will return after a two year hiatus, due to demand from the route development community. The event, which will be the 12th Routes Africa, is the most long standing and established aviation forum bringing together leading airlines, airports and tourism authorities to discuss air services to, from and within Africa for over a decade.

This year’s event will be held in Accra, Ghana from 16-18 July and hosted by Ghana Airports Company Limited (GACL). Mr. John Dekyem Attafuah, Managing Director, Ghana Airports Company Limited, said: “GACL is pleased to play host to the 12th Routes Africa. It is a unique opportunity for us to showcase Ghana to the world. The aviation industry in Ghana, stands out as one of the fastest growing and most competitive in the region. GACL on its part, has taken the needed steps to expand infrastructure to meet the growing demand and is poised to provide world-class facilities and services for the benefit of our stakeholders”.

Attafuah continues “GACL is getting ready to unveil its flagship project, Terminal 3 in July this year. Terminal 3 promises to be the game-changer, as Ghana inches closer to becoming the destination of choice and the preferred aviation hub in the West African sub-region. It is designed to have modern facilities that will undoubtedly position Kotoka International Airportamongthebest equipped airports in the region”.

“We look forward to attracting more airlines and other aviation related businesses as a result of our association with Routes Africa. Ghana is, after all, positioned in the centre of the world and nowhere is too far!”

Routes Africa’s return to the annual route development calendar sees a number of new innovations as part of the event, including a certified route development accreditation for all attendees by Routes’ sister company, ASM.

ASM, who pioneered the concept of route development 25 years ago and established Routes events, will be holding a dedicated version of their world renowned ‘Fundamentals of Route Development’ training course as part of the Routes Africa programme.

“Speaking from the AFRAA event in Zanzibar, Event Leader, Mark Gray stated “We have been working on Routes Africa’s return for some time now, and have listened to the demand from our airline and airport customers throughout the region who have felt that huge benefit from attending the event in previous years”. Gray continues “we wanted to find the right host and we feel that in Ghana Airports Company we have found that. Their recent terminal development and the state of the art e-gates they have recently installed, really show their commitment to progressing the infrastructure that Africa clearly needs if it is to live up to its growth potential.”

Steven Small, Brand Director for Routes stated “We are delighted to be bringing Routes Africa back to the annual route development calendar and Ghana looks set to be the perfect host to deliver the event with us. Our Event Leader, Mark Gray, is an extremely experienced member of the Routes team, who has been integral in the development of all Routes events for more than a decade. Mark’s passion and drive for the Africa region, stems over many years and his relationships within the region, with both airlines and airports, makes him the right choice to step into the essential role in driving forward Routes Africa for many years to come.”

Routes Africa 2019 to be held in Kenya