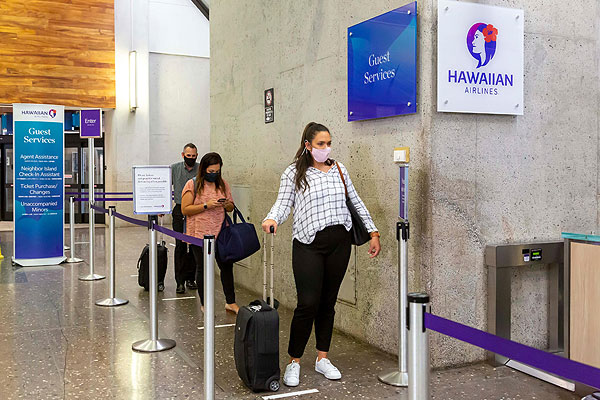 HONOLULU – Hawaiian Airlines announced it will resume a reduced schedule between Hawai?i and most of its U.S. mainland gateway cities on Aug. 1, when the state of Hawai‘i begins welcoming travelers who choose to participate in a pre-travel COVID-19 testing program being developed. Hawaiian will also increase neighbor island flights to offer guests more seamless connectivity between O‘ahu, Kaua‘i, Maui and the Island of Hawai‘i.

“The layered safety measures put in place to protect the health of our local communities promise to make travel to and from Hawai’i more accessible than in recent months,” said Peter Ingram, president and CEO at Hawaiian Airlines. “We look forward to welcoming onboard guests who support and observe the protocols in place for responsible travel, including our visitors and kama’aina reconnecting with family and friends on the U.S. mainland.”

Hawaiian plans to resume weekly service between Honolulu and American Samoa on Aug. 6. Passenger service for the carrier’s international markets remain suspended due to restrictions on inbound travel.

Following these service additions, the airline will be operating an average of 252 weekly flights connecting Hawai‘i to the U.S. mainland and 114 daily flights within the Hawaiian Islands.

In May, Hawaiian implemented a comprehensive health and safety program for guests and employees that includes the use of face coverings, airport and onboard spacing, and enhanced cleaning measures. The carrier created a short video to prepare guests for what they can expect when flying on Hawaiian.

Hawaiian Holdings, Inc. appoints Wendy Beck and Craig Vosburg to its Board of Directors