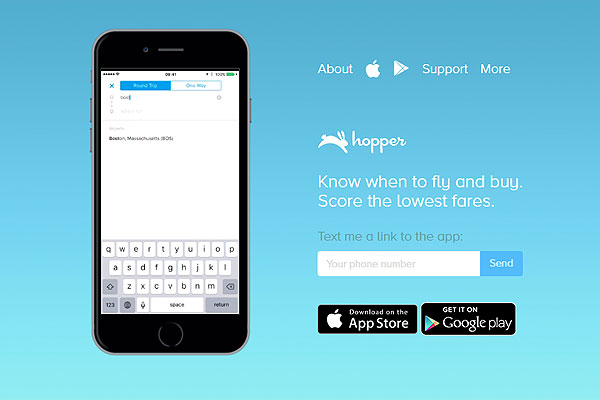 Hopper, whose head office is based in Montreal, will use the funds to further scale its growth, expand its international presence, and partner with more airlines abroad.

Hopper, whose head office is based in Montreal, will use the funds to further scale its growth, expand its international presence, and partner with more airlines abroad.

"Mobile commerce has reached the tipping point globally. We have growth initiatives slated for Q1 2017 in over 20 countries in Latin America, Europe and Asia," said Frederic Lalonde, CEO and co-founder. "Hopper is sending over 20 million push notifications a month and 90% of Hopper's sales come directly from push notifications."

"Hopper stands out through its innovation capability by using highly sophisticated technologies to predict customer demand and buying behaviour," said Christian Dube, Executive Vice-President, Quebec, of la Caisse. "This financing is intended to consolidate the company's current lead in the market by accelerating the pace of its development and global expansion."

In the past year, Hopper has scaled from 1 million users to more than 10 million users, who have collectively used the app to track 18 million individual trips. The company's sales have also grown by 23X. In fact, Hopper is installed over a million times each month and is now selling $1 million in flights per day in 126 countries.

Hopper is currently the only company that can forecast future flight prices with 95% accuracy up to a year in advance of departure. The app recommends whether you should book now or wait based on current and historical yield trends as well as pricing volatility. Hopper collects five to eight billion airfare price quotes daily, and has built a huge historical archive of 5.2 trillion prices from the past several years.

Hopper has earned accolades such as the Apple's App Store Best of 2015 award, the Google Play Award for Standout Startup of 2016, and the 2016 Webby Award for Best Travel App.

The company's Series C funds will also fuel Hopper's hiring initiatives. Hopper plans to scale from 40 employees to more than 120 employees in Montreal and Boston by the end of 2017.

Hostaway and Hopper announce their integration

Gordian Software and Hopper reach milestone in partnership with over 2.5M seats booked