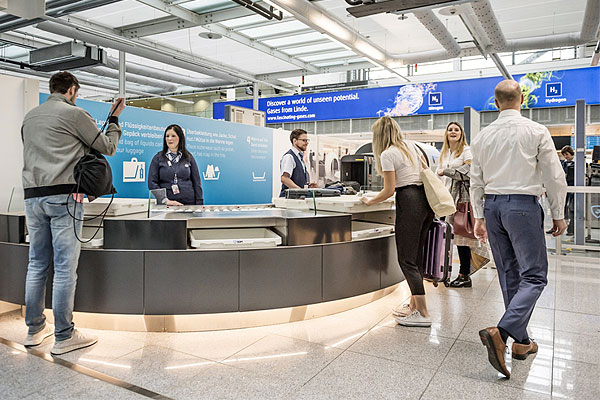 As well as checking all items of carry-on baggage for solid and liquid explosives, the CT scanners provide the screening staff with a three-dimensional view of each carry-on baggage item on a screen.

Renovation work gets under way at Munich Airport’s Terminal 2: The central security checkpoint at Munich Airport’s Terminal 2 is being modernized and equipped with state-of-the-art technology, with completion scheduled for fall 2024. As a result, passengers of Lufthansa and its partner airlines will benefit from faster, more effective procedures and much greater convenience.

Instead of the familiar traditional checkpoints, lanes with innovative technology will be used in the future. First of all, in the week commencing Monday, December 12, 2022, Lufthansa’s Service Center on Departures level 04 will be sealed off and dismantled to create the required space. A newly designed Service Center will be opened in the southern part of the check-in level. During the renovation phase of the screening lanes starting in January, passengers will be rerouted, and the number of screening lanes will be reduced at times.

Once the work is complete, passengers will benefit from a total of 15 new security screening lanes that meet the highest standards in terms of convenience and ergonomics. The district government of Upper Bavaria, the body responsible for passenger checkpoints at Munich Airport, is installing special CT scanners here.

As well as checking all items of carry-on baggage for solid and liquid explosives, the CT scanners provide the screening staff with a three-dimensional view of each carry-on baggage item on a screen. These new CT scanners mean that electronic devices and liquids will no longer have to be removed from passengers’ baggage. All personal items will be placed in large trays at the four preparation points of each lane and returned on a long output conveyor with lots of individual space. Passengers can take as much time as they need, and can even overtake slower passengers. As the modern screening lanes are so efficient, the passenger flow per screening lane can be increased significantly compared with the conventional screening lanes.

From now on, the central passenger checkpoint in Terminal 2 is being converted to the new technology in six construction phases. Upgrading of the first three screening lanes in Terminal 1 will start in the first quarter of 2023. In periods with high traffic volume, e.g. at Pentecost or during the Oktoberfest, the renovation work will be temporarily suspended in order to ensure availability of sufficient screening lanes and smooth handling of screening during these busy periods with particularly large numbers of passengers.

Munich Airport will then be the first airport in Germany to be almost entirely equipped with the new security technology and convenient screening lanes.