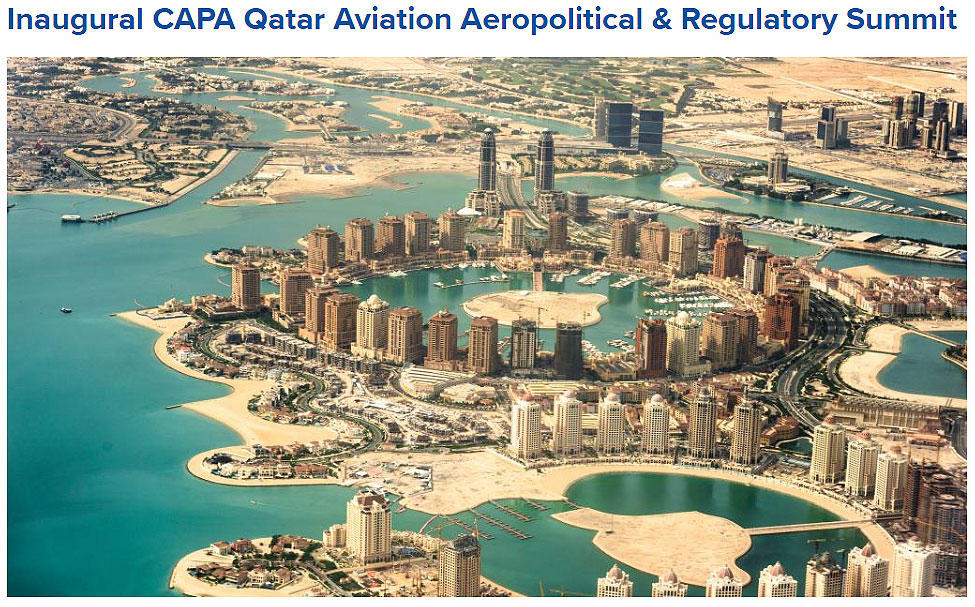 CAPA is pleased to partner with Qatar Airways, who will host the inaugural CAPA Qatar Aviation, Aeropolitical and Regulatory Summit in February, 2019.

The high level forum, taking place in Doha on 5/6-Feb-2019, will address the latest developments in international aviation regulation, both within the Gulf Cooperation Council countries and globally.

Market access and open skies agreements under the spotlight
For an industry as global as the airline business, it seems impossible that there could be major constraints on international cooperation and national ownership. But there is a growing belief in the airline industry that the 70 year old provisions restricting the foreign ownership and control of airlines are archaic and should be significantly liberalised – or abolished.

Open skies agreements have paved the way for increasing liberalisation and removed capacity constraints in many bilateral and multilateral aviation markets; innovative airlines have resorted to creative forms of experimentation to circumvent ownership and control rules. These have taken many forms, including cross border equity purchases/JVs in Southeast Asia and Latin America and multinational ownership within the EU.

Any change in such a longstanding system is always like to generate pushback from some incumbent operators who are unwilling or unable to adapt. In many cases, national governments have however adopted more holistic policies which recognise the wider benefits of aviation, revising the role of flag carriers in their home markets. There are however exceptions, such as Canada, as well as some European and other governments.

These standouts may be influential as two major multilateral agreements are likely to be reviewed in 2019, in the post Brexit environment as the UK is forced to renegotiate individual air services agreements within Europe, as well as a new UK-US agreement that would cover the trans-Atlantic market.

Meanwhile, the EU-Qatar and EU-ASEAN comprehensive aviation agreements have the potential to create a different atmosphere in the regulatory climate. These negotiations are not without their challenges.

As the EU and GCC group of nations embark on talks to increase market access, dissenting voices worry about opening up EU skies to the Gulf super-connectors. Yet in many ways the Middle East Big 3 have not been as much of a threat as originally portrayed, in some cases forging deep partnerships with longer established airlines.

The CAPA summit will seek to tap into some of the dynamic changes taking place in the regulatory environment, as key industry and government figures address:

CAPA and Qatar Airways jointly develop agenda content
Qatar Airways Group Chief Executive Officer, His Excellency Mr. Akbar Al Baker, said: “Qatar Airways is delighted to host the upcoming CAPA Qatar Aviation, Aeropolitical and Regulatory summit in Doha. This conference, CAPA’s first aeropolitical event to be held in the Middle East, will provide a forum for the discussion of key topical issues, including the rapidly evolving global regulatory environment, existing constraints on international cooperation and the future of open skies. We look forward to welcoming senior aviation executives, members of the legal community, governmental officials and all guests to Doha in February for this important summit.”

CAPA executive chairman Peter Harbison said: “We are pleased to be partnering with Qatar Airways for the inaugural CAPA Qatar Aviation, Aeropolitical and Regulatory Summit. In a rapidly changing global regulatory environment, the Summit is a timely and important forum for dissecting key issues around ownership and control, open skies and market access. We invite all industry leaders to join us in Qatar to engage in dynamic discussions and meet with senior decision makers from airlines and government.”

Territorial disputes between China, Japan and the Philippines take their toll on air transport