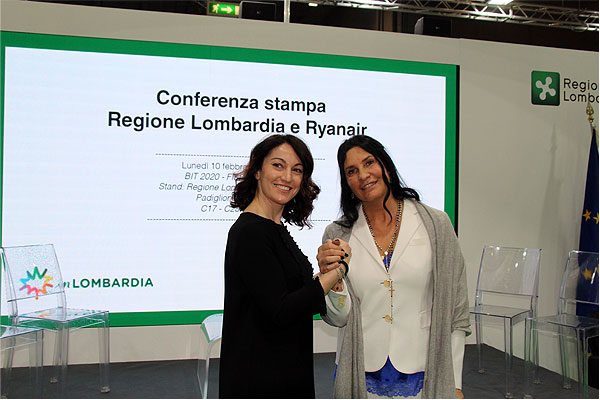 Booking from London Stansted for Milan Bergamo +26% (YOY) and for Milan Malpensa +43% (YOY). The partnership will continue in 2020.

MILAN – Regione Lombardia and Ryanair presented the results of their strategic partnership, which saw a significant increase in bookings from London to the Lombardy region of Italy. The project – which began in October 2019 – featured a multi-channel communications campaign promoting Lombardy as an exciting destination in the UK market, focusing on the London area.

The results of the campaign and partnership between the Regione Lombardia and Ryanair are very clear: reservations during the six-week campaign activation from London Stansted to Milan Bergamo grew by 26% compared to the previous year, while the route to Milan Malpensa saw an increase of 43% for the same period*

More than 3,000 direct reservations were generated by dedicated channels, while the visibility on social media received 3.8 million impressions and a total reach of 2.4 million.

Ryanair has been a key player in the development of the Lombardy region as a tourist destination, thanks to the direct regional connectivity with Milan Malpensa and Milan Bergamo airports, with different schedules throughout the year. This latest partnership with Regione Lombardia highlights Ryanair’s ongoing commitment to supporting the Lombardy region, which aims to become the biggest tourist destination in Italy.

This target is based on the success of Milan Bergamo which – through the support of Ryanair – has grown from a regional airport to the 3rd largest airport by traffic volume in Italy. The total traffic on Milan generated by Ryanair will reach 14.5m passengers per year (+4.5%), with over 120 routes, by Summer 2020.

The campaign has achieved its goal of growing UK traffic, by promoting Lombardy as a year-round tourist destination with beautiful scenery as well as a rich historical and cultural heritage – focusing on 12 cities and villages, with four key 4 pillars (culture, food and wine, wellness and active holidays.)

In addition, a social media and digital advertising campaign has been launched, which will run three contests on Instagram and Facebook with a total of 6 winners – who will explore the Lombardy region in the months between April and June.

Promotional activities also included the organization of family trips with travel consumer journalists and influencers from the United Kingdom. The 4 pillars of the campaign (culture, food and wine, wellness and winter sports) were the focus of several promotional videos.

Lara Magoni, Tourism, Territorial Marketing e Fashion Councillor of Regione Lombardia said: “The figures show that the collaboration between the Lombardy Region and Ryanair was a resounding success. The increase in bookings during the period of the multi-channel communication campaign underline that the Lombardy destination is appreciated by the UK market. We have achieved our aim: to lead travelers to discover the naturalistic beauties of the Lombard territory, taste the flavors of the food and wine specialties, know the art cities and immerse themselves in the fairytale atmospheres that our small villages can give. A multimedia campaign created in coop with the Irish airline, which demonstrates the importance of digital and social channels to further increase the attractiveness of places and increase the appreciation of Lombardy's destinations internationally. In this sense, technology and tourism are truly a winning combination".

Chiara Ravara, Head of sales & marketing Ryanair said: “Ryanair is pleased to announce the excellent results achieved by the partnership with Regione Lombardia, which ran for 6 weeks between November and December – but will continue to positively impact the region into 2020 and beyond. Through this campaign, we invited our customers to explore the Lombardy region, beyond the capital of Milan, and to discover its 12 fascinating cities and the hidden precious treasures, from various points of view: culture, food and wine, wellness and winter sports.

Ryanair is the No. 1 airline in Italy and in Europe, with the largest network of direct international connections throughout the year, to the best destinations. Because of this we are the ideal strategic partner of the Lombardy Region, with the ability to tackle the two main challenges facing Italian tourism, namely regionality and seasonality.”

* YoY growth data from London Southend is not available, since/as the flight was introduced in 2019