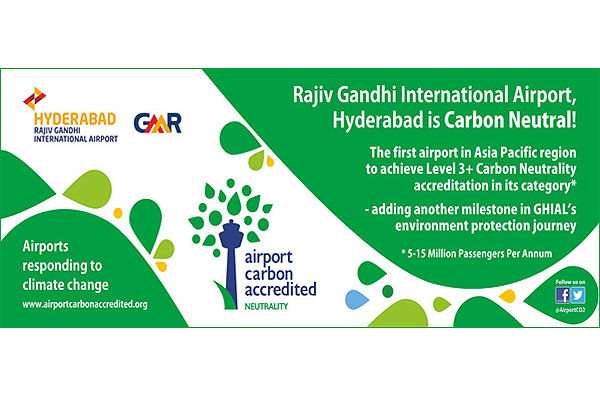 Niclas Svenningsen, who heads the Climate Neutral Now initiative at the United Nations Framework Convention on Climate Change (UNFCCC) Secretariat in Bonn, Germany commented "The announcement that Manchester Airport and Hyderabad Airport have achieved carbon neutrality through Airport Carbon Accreditation is great news. The ambitious efforts of a growing number of carbon neutral airports are testament to how serious this industry is about addressing its direct impact on climate change. Our congratulations to the teams in Manchester and Hyderabad – we look forward to other airports following your example."

This brings the total number of carbon neutral airports around the world to 27, while the overall programme now counts 176 airports across the 4 available levels of certification.

Over the last decade, Manchester Airport has significantly reduced the energy it uses, saving the same amount of energy as used by 10,000 homes each year.  In addition, Manchester Airport has invested more than £7.5 million in energy efficiency projects, working with local and national businesses to develop innovative lighting solutions. The award winning energy management team have now installed more than 25,000 low energy LED lights throughout the airport, including the first on any UK runway.

Collectively, these initiatives have reduced emissions from the energy and fuel used to operate the terminals, runways and facilities at Manchester Airport from 72,000 tonnes CO2e in 2006 to zero in 2016.

Speaking at the certification ceremony in Manchester, Olivier Jankovec, Director General, ACI Europe commented: "Congratulations to all the team at Manchester Airport on this achievement. Becoming carbon neutral is no small feat and today actually serves as a timely reminder of how much work Manchester Airport has put into achieving this goal. They were one of the airports that participated in the pilot phase of the programme and they have worked their way up through the 4 levels of the programme over the intervening years – we actually launched Airport Carbon Accreditation here in Manchester at our Annual Congress in 2009. So, it really is a red-letter day for Manchester Airport, for the programme and for air transport in the UK."

Ken O’Toole, CEO of Manchester Airport commented "At Manchester Airport we are committed to being one of the leading European airports when it comes to environmental management. We are proud of our track record. After a decade of hard work to reduce the amount of energy we use, I am pleased to be the first UK airport to be recognised by Airport Carbon Accreditation as carbon neutral."

"As an organisation we recognise that climate change is an important global challenge, with aviation contributing around 2% of international carbon emissions each year. This achievement demonstrates the lengths we go to ensuring we balance our role as economic generator, alongside caring for the environment, whilst working with our third parties to reduce the wider impact of our industry."

Commenting on the development, Mr. SGK Kishore, CEO, GHIAL, said, "The Level 3+, Neutrality status awarded by ACI under its Airport Carbon Accreditation programme is a significant achievement for Hyderabad Airport. This achievement is an outcome of our sustained efforts towards environment by proactive energy conservation measures, generation of renewable energy (Solar), carbon sinking through extensive greenbelt and various other environment protection measures with the active support of the airport’s stakeholders. Through this, GHIAL has demonstrated its commitment to support the Government of India’s resolution on the nation’s carbon footprint and oblige to COP21 Global Climate Agreement with United Nations Framework Convention on Climate Change (UNFCCC) in April 2016."

Patti Chau, Regional Director, ACI Asia-Pacific said "Congratulations to Hyderabad Airport’s team for the excellent achievement in becoming carbon neutral under Airport Carbon Accreditation. We are proud of their accomplishment which is no easy task. It demonstrates the airport’s continuous commitment to reduce its environmental impacts and reduce and offset emissions. ACI will continue to work with our airport members in their journey towards carbon neutrality which is crucial for the long-term development of our industry."

Finally, building on VINCI Airports’ extraordinary engagement of all of its airports in the Airport Carbon Accreditation programme (including airports in France, Portugal, Cambodia and Japan), it has just successfully received certification at Level 2 ‘Reduction’ for its CO2 reduction at Osaka and Kansai airports in Japan.