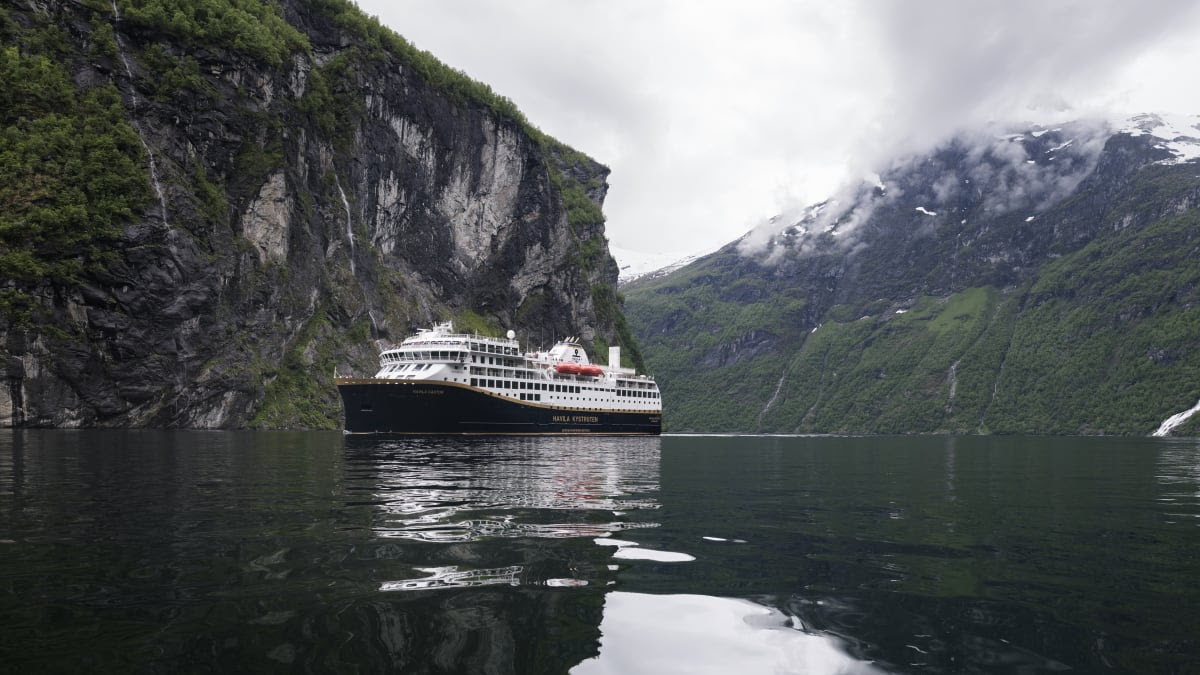 Havila Castor was the first cruise ship of its kind to sail the world heritage of the Geirangerfjord emisson-free in June 2022.

Participants in the Norwegian collaboration will strive towards reducing emissions from shipping by 50% by 2030, in line with the Norway’s national climate goals. This comes in addition to the current target of the International Maritime Organization (IMO) to reduce CO2 emissions from global shipping by at least 40% by 2030 and 70% by 2050.

In response to the Green Shipping Challenge formulated jointly by the Governments of Norway and the United States, Norwegian maritime cluster organisations, shipping-industry associations, shipowners, business organisations, classification societies and finance actors together commit to far-sighted cooperation to achieve zero emissions for the maritime sector. Havila Voyages supports the initiative.

The Green Shipping Challenge, whose primary aim is to catalyse the global transition to green shipping, was issued as part of a joint statement on climate by Norwegian Prime Minister Johas Gahr Støre and Special Presidential Envoy on Climate John Kerry in May 2022.

The Norwegian collaboration will be formally announced on Monday 7th of November at a high-level launch event during COP27 in Egypt. Prime Minister Støre will be in attendance alongside Mr Kerry and Norwegian Climate and Environment Minister, Espen Barth-Eide. The Norwegian maritime partners will be represented by Confederation of Norwegian Enterprise (NHO) President, Svein Tore Holsther.

Participants in the Norwegian collaboration will strive towards reducing emissions from shipping by 50% by 2030, in line with the Norway’s national climate goals. This comes in addition to the current target of the International Maritime Organization (IMO) to reduce CO2 emissions from global shipping by at least 40% by 2030 and 70% by 2050.

Alongside efforts to improve the energy efficiency of existing vessels, the partners undertake to develop, design and build the zero-emission vessels of the future. Achieving 2030 national climate goals will require 700 low-emission and 400 zero-emission ships in Norway alone.

“Together we are ready to enter into a binding partnership with the authorities to reach our national climate targets, and this is a big step towards closer cooperation,” said Head of Cluster Daniel Garden of GCE Blue Maritime.

“To have the lowest impact on the world's natural resources, the transition must consist of both a green conversion program for existing ships, as well as a comprehensive green newbuilding program. The partners will also contribute to nascent green shipping corridors in Europe through the development of port infrastructure along the Norwegian coast,” he added. “To transform the entire industry, we must provide and share zero-emission solutions, products and knowledge both within the collaboration and out in the wider market.”

Harald Solberg, CEO of the Norwegian Shipowners' Association, commented: “The Norwegian maritime industry has set ambitious climate goals, and we are taking a leading role in developing green solutions for the future. Already, nine out of 10 Norwegian shipowners say that they will equip their ships with new technology that cuts emissions. The same number also believe they will be climate neutral by 2050. Owners are considering a wide range of solutions, such as green ammonia, hydrogen, wind-assisted propulsion, batteries and the use of artificial intelligence to reduce ships' fuel consumption. However, to succeed with the green shift we need strong partnerships between the industry, governments and academia. We welcome the Norwegian government’s commitment in this regard.”

Knut Ørbeck-Nilssen, CEO of DNV Maritime, added: “Climate change caused by human activities is the greatest challenge of our time. The Norwegian maritime industry is taking this extremely seriously. We are very optimistic about this partnership as Norway is very well positioned to be in the vanguard of change and to create significant value in new solutions to combat the climate crisis.”

Norwegian financial partners with maritime patronage will utilise capital instruments to support green measures and projects through the provision of risk capital and financial advisory services in line with regulatory requirements and expectations. Norwegian government support for green initiatives and infrastructure development for fossil-free energy sources will also play a key role."

Havila Voyages supports the initiative
At Havila Voyages, the support of this industry appeal was decided quickly. “This is completely in line with our visions for the future of our industry in general, and along the coastal route in particular. Therefore, it was only natural for us to support this initiative”, says CEO of Havila Voyages, Bent Martini.

“In many ways, we have already set a new standard both in the world heritage and along the coastal route and have proven that it is possible today to reduce our emissions significantly, while at the same time have forward-looking and achievable thoughts for the future. Our goal is to be the first to sail emission-free along the Norwegian coast”, Martini concludes.

Havila Castor has arrived in Bergen

Havila Capella has been granted a dispensation to sail

The top five countries that play the most Bingo