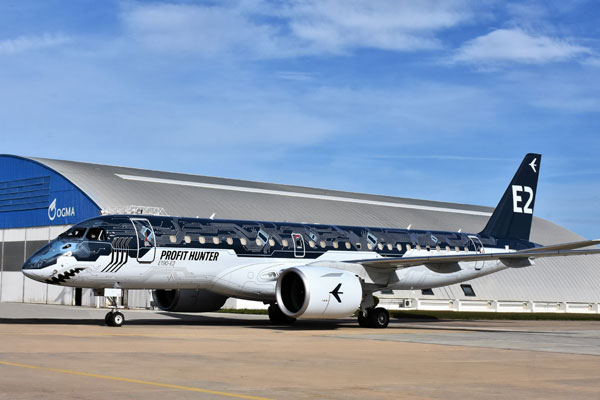 The company will perform the first maintenance of this aircraft model in the world. OGMA receives certification from the Portuguese aeronautical authority (ANAC).

LISBON, PORTUGAL – OGMA, Embraer’s Group company, reached a historic milestone by becoming the first Authorized Maintenance Center certified by the Portuguese aeronautical authority (Autoridade Nacional da Aviação Civil – ANAC) to carry out commercial aircraft heavy maintenance for the E-Jets E2 family of commercial aircraft in Europe, Middle East, and Africa (EMEA). The announcement was made during the global Embraer Operators Conference (EOC), which is being held in Lisbon. Therefore, OGMA expands its business operations in the commercial aviation segment.

With this certification, OGMA is prepared to carry out heavy maintenance, total fleet management, engineering solutions, airworthiness management, support maintenance, and future aircraft modifications that meet customer requirements and retrofit the family's aircraft of E-Jets E2. In addition, OGMA has just signed a contract with the Norwegian airline Wideroe to carry out the first maintenance of an E2 aircraft worldwide.

“Obtaining this certification by OGMA is a crucial strategic step to strengthen Embraer's presence in the EMEA region and is an unmistakable sign of the continued commitment we make to Portugal as a leading technological partner in the country's aeronautical industry,” says Johann Bordais, President & CEO, Embraer Services and Support. “We are certain this certification will reinforce the company's international recognition in the maintenance of aircraft in civil aviation and, in particular, the E2 aircraft.”

“We are delighted to reach such an important milestone, which results from the tireless work of a great team. Being the first Embraer Authorized Maintenance Center for the E2 in the EMEA region is an important credential for OGMA in such a competitive and demanding sector as the international aviation market. This is just the starting point of an important cycle for the company's growth, with more business, new customers, and opportunities,” said Alexandre Solis, CEO of OGMA.

OGMA consolidates its experience and knowledge in civil aviation and Embraer aircraft maintenance. Since 1998, it has been an Embraer Authorized Maintenance Center for the ERJ 135, ERJ 140, and ERJ 145 regional jets, with over 300 C-Checks carried out, offering various services. Since 2007, OGMA has supported the E-Jets family of commercial aircraft, with more than 50 C-Checks performed on this aircraft and the capability for a wide range of MRO services. OGMA’s experience and knowledge in maintenance of the E-Jets first generation of commercial aircraft will be utilized at the service of the E-Jets E2 family.

SalamAir, Oman’s Low-Cost carrier, selects the Embraer E195-E2 for next stage of growth