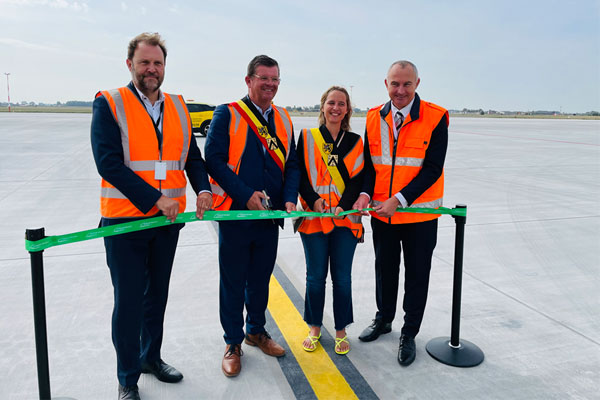 Commissioned by the LOM Flanders, “apron 2” – the central aircraft parking area in front of the passenger building – was completely renovated.

Important infrastructural works have been completed at Ostend-Bruges Airport. The aircraft parking area in front of the passenger building was renewed. "This is an important step for this airport," says Bruno De Saegher, chairman of the LOM Vlaanderen. "These works were necessary to continue to guarantee the safety of air traffic in the future."

Commissioned by the LOM Flanders, "apron 2" – the central aircraft parking area in front of the passenger building – was completely renovated. This is the airport's largest aircraft parking area and is used to handle cargo and passenger flights. In addition to "apron 2," the airport also has the east-facing "apron 1" used for cargo handling, and the west-facing "apron 3" used for general aviation.

"The 160,000 sq. ft. aircraft parking lot was excavated to the foundation level and received a new concrete pavement. The service road received a new layer of asphalt. All the sewers under the aircraft parking lot, including those of the Albertus conductor, were also renewed," says LOM chairman Bruno De Saegher. The LOM Flanders invested 12.4 million euros for these works.

The works will extend the life of the aircraft parking lot by another 40 years. This is an important step for the further development of this airport. These works were necessary to continue to guarantee the safety of air traffic in the future. The existing infrastructure was renovated; the works do not lead to an increase in the capacity of the airport.

Progress of the works
From an organizational point of view, the renovation of the aircraft parking area was not straightforward, as the airport remained fully operational during the works. This was possible thanks to the good coordination between the client (LOM Vlaanderen), the contractor (COLAS) and the operator (LEM Oostende-Brugge).

The works started in April 2021 and took place in two major phases. During the first phase, the eastern part of the aircraft parking lot, including the foundation, was broken up and the western part remained in use for air traffic. After the construction of the sub-foundation (in crushed concrete rubble) and the foundation (in lean concrete), two concrete layers totaling 30 cm thick were poured on top of each other. This is necessary to ensure the necessary bearing capacity for the heavier aircraft. In January 2022, the second part of the renovation was started, and the western part was tackled. From then on, aircraft could already use the (renovated) eastern part of the aircraft parking lot. The entire project was completed after just over a year.

During the renovation works, several projectiles from World War II were found. These were always removed safely, and the DOVO demining service also had to come to the site several times. There was never any danger for the airport or local residents, and the disruption to air traffic was always limited.

Much attention to sustainability
Ostend-Bruges Airport attaches great importance to sustainability. Therefore, as much as possible of the concrete of the old surfacing was recycled and reused. For that purpose a temporary concrete plant was built on the airport site. By recycling the old paving on site, not only was unnecessary dumping of concrete waste avoided, but a lot of driving back and forth by trucks was also saved.

After the old pavement was recycled, it was reused for the underpinning and foundation of the renovated apron. During the renovation, the infrastructure for an electrical connection was also provided on a number of stands, so that aircraft no longer have to use their own power generators when parked. This avoids a great deal of fuel consumption and CO2 emissions.

Quote Alderman for Business Charlotte Verkeyn (CIty of Ostend)
"I am pleased with the beautiful result of this thorough renovation.  This necessary investment should help us to guarantee in the years to come the crucial role that Ostend Airport plays in Flanders."

Quote Mayor of Ostend Bart Tommelein
"The airport is a great asset for Ostend. The renewed Apron 2 is the largest aircraft parking and is used for both passenger and cargo flights. The renovation was necessary for the sustainable growth of the airport. The City will continue to support the airport in its further development as an economic hub for all kinds of related and innovative activities."

Ostend-Bruges and Antwerp Airport look back on strong summer holidays

Hotelbeds dives into new segment with first ever airport partnership