Outbound USA travel forecast for the 4th of July weekend 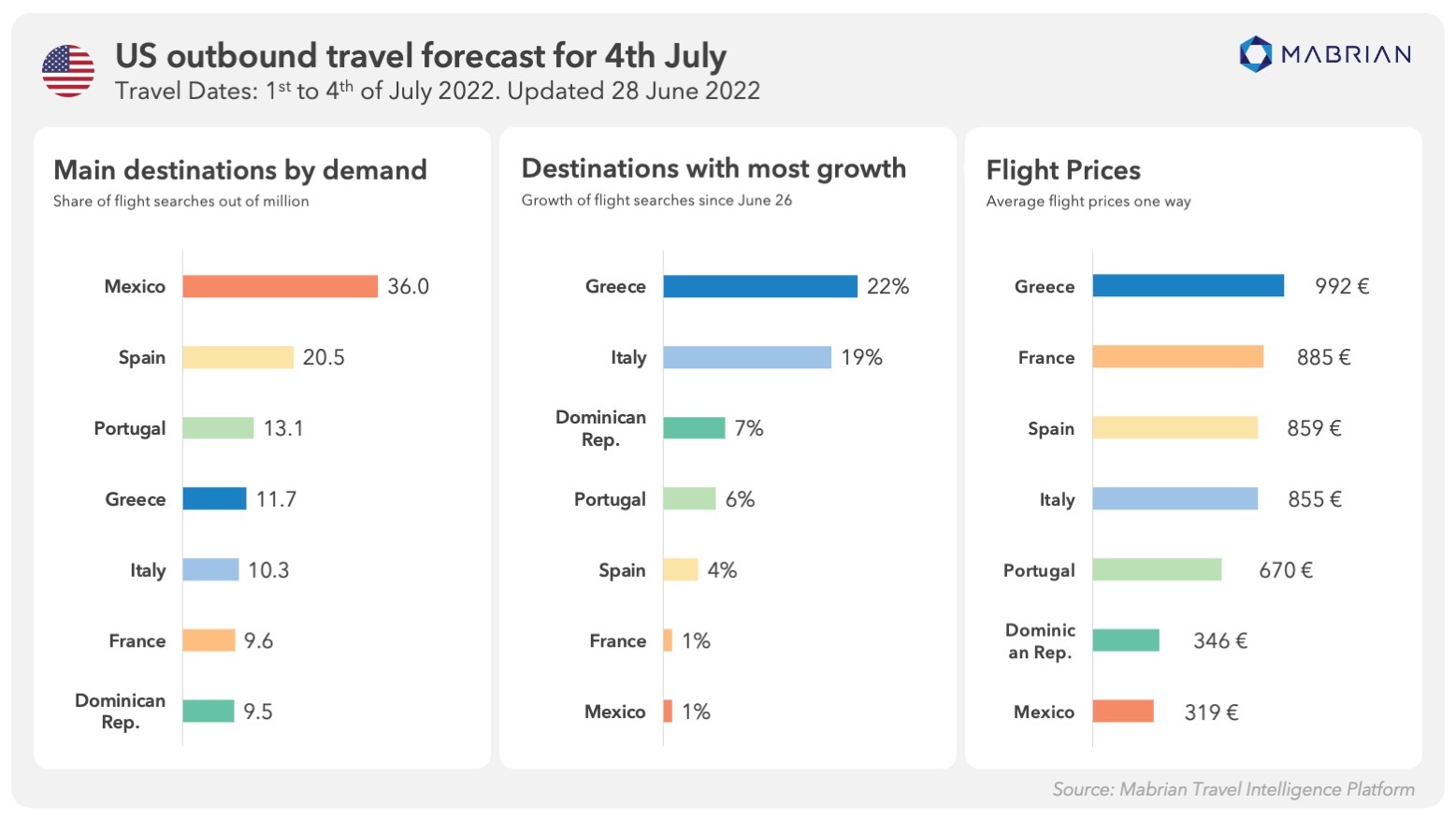 Countries ranked according to US demand for international travel during the 4th July long weekend.

This coming Monday 4th of July is Independence Day in the United States and many Americans, taking advantage of the fact that the holiday falls on a Monday, will celebrate it by traveling to international destinations.

Mabrian, the leading tourism intelligence company, has analyzed the outlook for trips from the United States to the main international destinations using their own Mabrian indicator that measures the strength of market demand for a destination based on searches.

The conclusions that have been drawn are the following:
1. Mexico is the destination that arouses most interest from Americans to travel to during these dates, with a score of 36.0 per million searches.
2. Spain is the next country in terms of demand, among the countries analyzed, and the first among the European destinations analyzed for this study, with a score of 20.5.
3. Portugal (13.1) exceeds Greece (11.7) in terms of demand, with Italy at (10.3) and France (9.6). Whilst at the bottom of the list is the Dominican Republic (9.5).

Mabrian detected that the increase in demand begins on the weekend before July 4. This may indicate that Americans are planning to extend their vacations by taking advantage of the long weekend.

The analysis also reveals that  Greece and Italy are the destinations that are growing the most in terms of the interest of Americans for this period. This 2022, Greece has improved its connectivity with the United States, both through an increase in air seat capacity (+44% 2022 vs. 2019) on the routes that already existed before the pandemic, and the opening of three new routes that connect the destination with Boston, Washington and Atlanta.

To reach all these destinations, the most competitive prices for direct flights (one way) from the US are to Mexico and the Dominican Republic, which do not exceed 350 euros on average. The highest price of direct flights from the United States is to Greece, reaching, on average at 1,000 euros, whilst the cheapest average price is for flights to Portugal. The rest of the prices for European destinations start at 855 euros on average.

The fastest growing source markets with flights to Madrid for 2023

The footprint of American tourists visiting Spain in summer 2022