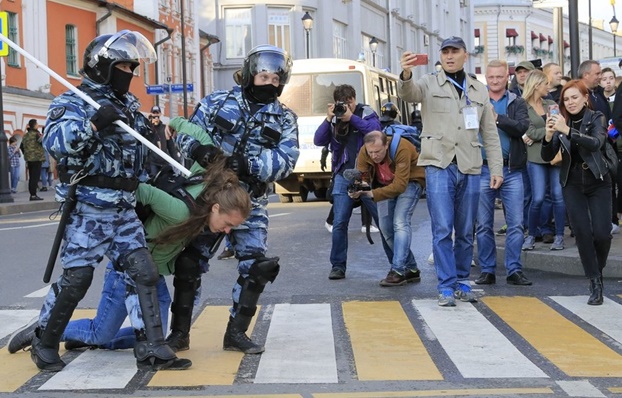 Dozens of arrests were made in Moscow after groups of activists heeded calls for unauthorized protest “walks” through central streets. It follows the opposition rally that gathered tens of thousands and went off without incident.

Dozens of arrests were made in Moscow after groups of activists heeded calls for unauthorized protest “walks” through central streets. It follows the opposition rally that gathered tens of thousands and went off without incident.

A rally in support of opposition candidates, who’d been barred from the Moscow City Council election over paperwork irregularities, concluded on Sakharov Avenue by Saturday evening, with conflicting attendance estimates, ranging from 20,000 to 50,000. Not everyone went home after the event was over, however.

A group of several hundred people made their way to Maroseika Street and the surrounding areas, within walking distance from the Kremlin, and continued their protest there, chanting anti-government slogans.

Scores of riot police in helmets and bulletproof vests arrived on site and blocked the traffic on the street.

They used loud speakers to persuade the protesters to disperse. Those who refused the appeal were arrested en masse. At least 136 were detained in central Moscow “for various violations,” the Interior Ministry said. Conflicting unofficial figures claimed nearly twice as many detentions were made.

Calls to go on “peaceful walks” after the Saturday rally appeared on social media in the run up to the event. Police and authorities warned that any unsanctioned marches would be immediately curbed, citing public security concerns.

Lyubov Sobol, an unregistered opposition candidate who got rejected over alleged signature collection fraud, was detained ahead of the rally. Masked police broke down the door to the premises used as her HQ and proceeded with the search and the arrest, with the Interior Ministry later explaining that “some organizers” of the Saturday event informed them Sobol was preparing provocations. Elena Rusakova from the opposition party Yabloko then accused the police of lying, listing the organizers who, she said, did not report Sobol to authorities in a Facebook post.

Top things to see in Russia in 7 days

About 2,000 additional branded hotel rooms opened in Russia and CIS in H1 2016