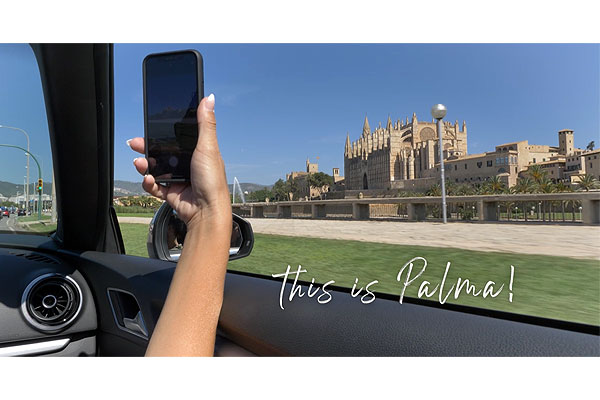 The launch of United’s new service between Newark International Airport and Palma Son Sant Joan Airport heralds a new era for the capital of Spain’s Balearic Islands as it drastically augments tourism possibilities with American travelers.

PALMA, SPAIN – Palma’s significant investment in repositioning itself as a major city break destination has generated an influx of tourism over the past decade as well as the recent launch of the first and only nonstop flight from the U.S. via United Airlines. Renowned and valued as Europe's reference point for beach tourism, the capital of Spain’s Balearic Islands is garnering even more attention for being a lively cosmopolitan city that makes an attractive destination all year round thanks to its wide range of cultural, gastronomic, sporting and leisure options.

With a flourishing foodie scene, a bustling waterfront, and one of the world’s most awe-inspiring cathedrals, Palma is an utterly compelling destination. Dating back to the 13th century, Palma has a rich Gothic history, and many of the city’s buildings maintain their original baroque influence. Honey-colored stone and medieval streets makes for an incredibly unique look for a beach city. Despite being a historic town, Palma has a modern soul, with an endless list of modern culture, entertainment and gastronomy.  Coves, beaches, coastal cliffs and mountain ranges make up the island’s landscape. Inland you will find vibrant towns, top restaurants and bars, contemporary galleries, luxury shopping boutiques, bustling fresh food markets, looming baroque churches, and teeming public squares.

On June 2, United Airlines inaugurated its service between Newark Liberty International Airport (EWR) and Palma de Mallorca Airport (PMI) with three weekly flights on Boeing 767-300 planes with capacity for 204 passengers. According to Anna aero, New York was one of Palma’s most underserved destinations without nonstop flights. In 2019 a total of 29,380 of passengers flew indirectly to the Balearic Island. The new seasonal route allows seamless and direct travel for American tourists.

“It gives us immense pleasure to announce that we are directly connected to the U.S. via Newark, as it opens our doors for travelers looking to explore all Palma has to offer,” said Pedro Homar, Director of Palma Tourism Board. “Palma being named the newest destination for United is further testament to our region’s popularity, influence and relevance to Americans. We look forward to showcasing the Balearic Islands and are committed to ensuring this new partnership is an unrivaled success.”

Palma is the biggest city in Spain’s Balearic Island archipelago, which also includes fantastic destinations like Ibiza, Menorca, and Formentera. As the capital, Palma is a city of modern, hotel chains such as Melia, Iberostar, HM, Riu, and Marriott. In 2023, Palma and Mallorca will welcome the second Four Seasons to open in Spain as well as a Mandarin Oriental.

Mabrian reinforces its team to accelerate its expansion in Europe, the Middle East and Latin America