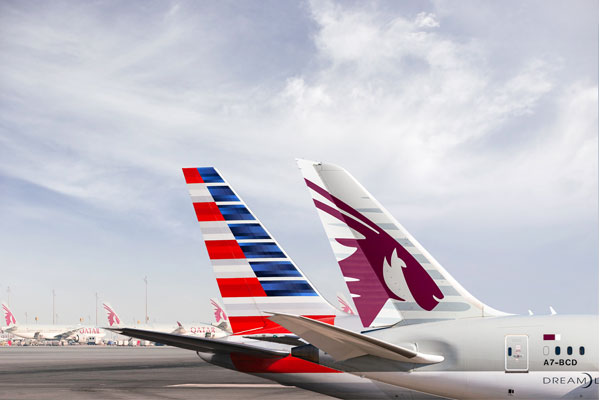 Qatar Airways Chief Commercial Officer, Mr. Simon Talling-Smith said: “This codeshare is just the first step in renewing our long-term strategic partnership with American Airlines. The rollout of this domestic codeshare demonstrates our airlines are confident about the future and during this difficult time we continue to focus on how we can enhance the customer experience for our millions of passengers. As two of the strongest airlines in the world, I have no doubt that we will overcome the current challenge and be well positioned to continue providing our passengers the reliable, safe and award-winning service that they have come to trust from us.”

American Airlines Senior Vice President of Network Strategy, Vasu Raja said: “We are pleased that we’ve reached this important milestone with Qatar Airways. We look forward to welcoming Qatar Airways passengers throughout our domestic network as we continue to focus on the wellbeing of our customers, team members and the communities we serve during this uncertain time. This is just the beginning of a strong partnership and we have a very bright future ahead of us.”

Both airlines will also continue exploring the opportunity for American Airlines to operate flights between the U.S. and Qatar, along with a number of joint commercial and operational initiatives to further strengthen this renewed partnership.

Qatar Airways continues to operate approximately 150 scheduled flights per week to over 30 destinations. The airline recently announced plans to gradually rebuild its network in line with passenger demand evolution and the expected relaxation of entry restrictions around the world. By the end of June the airline plans to expand its network to 80* destinations. The national carrier of the State of Qatar has built a strong level of trust with passengers, governments, trade and airports  as a reliable partner during this crisis. With its plans for expanding its network and strengthening airline partnerships, the airline is well positioned to continue delivering on its mission to the airline travellers can trust.

By maintaining 24/7 operations in recent months, including the provision of over 200 charter flights globally, Qatar Airways’ efforts to repatriate over one million people has received widespread praise and thanks from passengers and governments worldwide, as the foremost airline taking people home. The airline’s cargo division continues to operate a significant schedule with almost 175 flights per day. The cargo operator has worked closely with governments and NGOs to transport over 175,000 tonnes of medical and aid supplies to impacted regions around the world on both scheduled and charter services, the equivalent of roughly 1,750 fully loaded Boeing 777 freighters. A multiple award-winning airline, Qatar Airways was named ‘World’s Best Airline’ by the 2019 World Airline Awards, managed by the international air transport rating organisation Skytrax. It was also named ‘Best Airline in the Middle East’, ‘World’s Best Business Class’, and ‘Best Business Class Seat’, in recognition of its ground-breaking Business Class experience, Qsuite. It is the only airline to have been awarded the coveted “Skytrax Airline of the Year” title, which is recognised as the pinnacle of excellence in the airline industry, five times.

Hamad International Airport (HIA), the airline’s home and hub, was recently ranked “Third Best Airport in the World”, among 550 airports worldwide, by the SKYTRAX World Airport Awards 2020. Rising from fourth position in 2019 to third in 2020, HIA has been steadily rising in the ‘World's Best Airports’ rankings since the start of its operations in 2014. In addition, HIA was voted the ‘Best Airport in the Middle East’ for the sixth year in a row and ‘Best Staff Service in the Middle East’ for the fifth year in a row.

As States begin opening Up, survey shows travelers expecting to stay closer to home over the next six months

Yacht chartering is heading towards an indefinite uncertainty