Qatar Airways touches down for the first time in Davao, Philippines 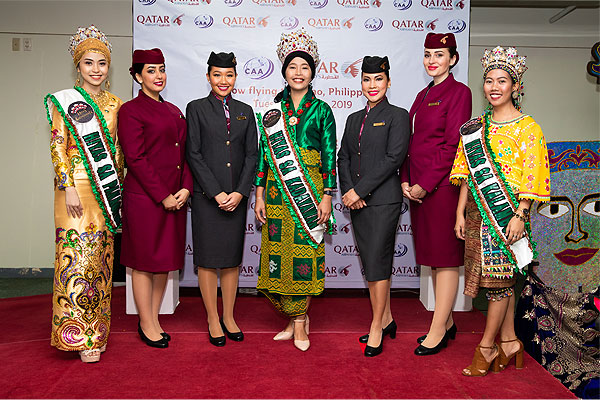 Davao is the third destination in the Philippines on Qatar Airways’ rapidly-expanding global network. Direct return services to Davao will operate once per week by a Boeing 787 Dreamliner.

The Ambassador of the Philippines to the State of Qatar, H.E. Alan Timbayan, was joined by Qatar Airways Senior Vice President Asia Pacific, Mr. Marwan Koleilat on board Qatar Airways’ inaugural flight to Davao.

Qatar Airways Group Chief Executive, H.E. Mr. Akbar Al Baker, said: “Qatar Airways is very proud to extend its reach into the Philippines by launching our third gateway into this beautiful country. The inclusion of Davao into our global network further demonstrates our commitment to the Far East region, a highly important market for Qatar Airways. With 50 weekly passenger flights to and from the Philippines, we take great pride in our role of enabling trade and connecting international businesses.”

Commenting on the new route launch, Davao International Airport Manager, Engr. Rex A. Obcena, said: “Davao International Airport is the main airport serving Davao City and Davao Region in the Philippines. It is the busiest airport on the island of Mindanao and one of the busiest in the Philippines. We look forward to welcoming all passengers on Qatar Airways’ weekly return flights.”

With numerous beaches and resorts, Davao City, on the southern Philippine island of Mindanao, is a coastal commercial center near Mount Apo, the country’s highest peak. Davao City is the largest city outside of Manila and the fourth largest in the Philippines in terms of population, with over 1.4 million residents.
The airline will operate its Davao service once a week with a Boeing 787-8 aircraft, featuring 22 seats in Business Class and 232 seats in Economy Class. Passengers will be able to enjoy the airline’s superior entertainment system, Oryx One, offering a wide variety of entertainment options.

A multiple award-winning airline, Qatar Airways was named ‘World’s Best Airline’ by the 2019 World Airline Awards, managed by international air transport rating organisation Skytrax. It was also named ‘Best Airline in the Middle East’, ‘World’s Best Business Class’ and ‘Best Business Class Seat’, in recognition of its ground-breaking Business Class experience, Qsuite. Qatar Airways is the only airline to have been awarded the coveted “Skytrax Airline of the Year” title, which is recognised as the pinnacle of excellence in the airline industry, five times.

Qatar Airways currently operates a modern fleet of more than 250 aircraft via its hub, Hamad International Airport (HIA) to more than 160 destinations worldwide. In addition to its service to Davao, Qatar Airways has launched an array of exciting new destinations recently, including Mombasa, Kenya; Izmir, Turkey and Malta to name just a few. The airline will add a number of new destinations to its extensive route network in the second half of 2019, including Lisbon, Portugal; Mogadishu, Somalia and Langkawi, Malaysia.