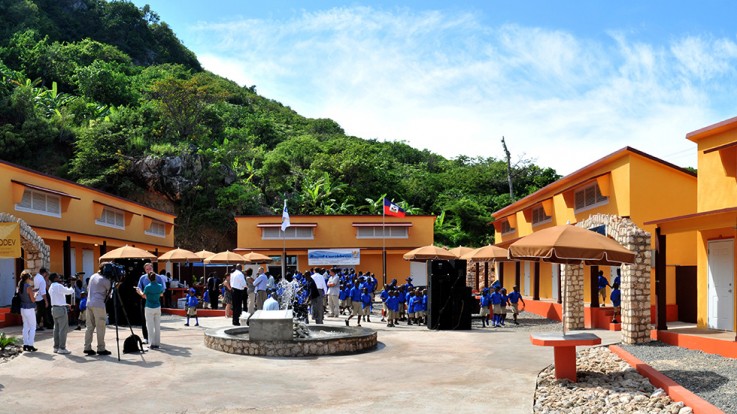 A team of 50 local haitian workers were hired by Royal Carribean Cruises Ltd., to build the school complex, which was completed in four weeks, just in time for the 2010-2011 school year.

For RCL, 2015 marked the completion of its 10-year Save the Waves goals, which focused on emissions and waste reduction,  as well as increasing the number of shore excursions that met an internationally recognized sustainability standard.

In line with these goals, over the past decade RCL built its most efficient cruise ships and reduced its greenhouse gas emissions by nearly 25 percent. In 2015, 17 ships reported 100 percent re-purposed waste on certain itineraries.

"At Royal Caribbean, we are working to put sustainability into the heart of our business," said  Richard D. Fain, Chairman and CEO, Royal Caribbean Cruises Ltd. "We bring 5,000,000 guests to nearly 500 ports around the world every year, and we understand our responsibility to do so in a way that protects the oceans that we sail every day. Our mantra is continuous improvement, and that especially applies to our environmental performance."

In the report, the company noted the expansion of its Advanced Emissions Purification program, as well as a new set of goals for the year 2020 that were established with input from the company's global conservation partner, World Wildlife Fund.

For the third year, the RCL developed its sustainability report in accordance with the internationally recognized GRI G4 guidelines. Additional highlights from the report include:

An industry-first software, seven years in the making, is optimizing ship speeds and routes to achieve the best possible fuel efficiency

The company has committed to only sourcing cage-free eggs and gestation-crate-free pork by 2022.