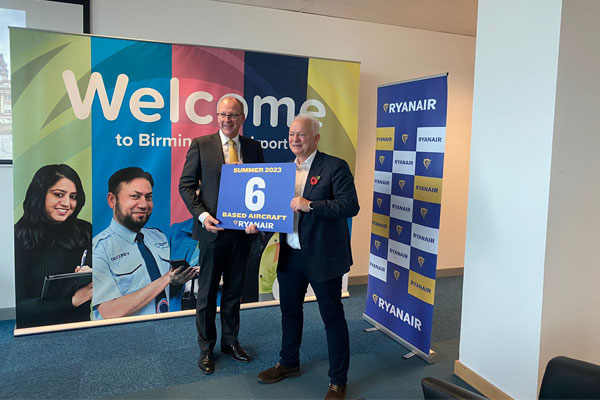 Ryanair announced its biggest ever Birmingham Summer schedule for 2023, operating 42 routes, including 7 new Summer routes such as Girona and Pisa, as well as even more flights on 10 routes. The addition of a new based Gamechanger aircraft, brings the total fleet at Birmingham to 6 – a $600M investment.

Summer ‘23 marks Ryanair’s biggest ever schedule at Birmingham with over 350 weekly flights giving citizens and visitors of Birmingham record-breaking choice to plan their much-deserved Summer holidays with confidence at the lowest fares.

While other airlines are cancelling flights across the UK, Ryanair is growing and reinforcing its commitment to Birmingham by adding a 6th aircraft to its based fleet for Summer’23, bringing its investment to $600M. The fleet includes a new Boeing “Gamechanger” aircraft, which cuts fuel and CO2 emissions by 16%, and lowers noise by 40%, meaning Ryanair will sustainably deliver more tourism to/from the region, while supporting over 1,700 local jobs.

Although Ryanair welcomes the UK Govt’s 50% APD cut for domestic travel from April’23, this reduction ignores the need to restore international connectivity which is fundamental for the growth of the UK’s economy and tourism. Ryanair calls on Prime Minister Sunak to fully abolish APD immediately for all travel, which would not only promote tourism, but support much needed connectivity to the UK, an island-based economy.

From Birmingham, Ryanair DAC CEO, Eddie Wilson said: “Ryanair, the UK’s most reliable airline, is delighted to launch our biggest ever schedule in Birmingham for Summer’23, with over 350 weekly flights across 42 routes, including 7 new Summer routes to the likes of Girona and Pisa, and even more flights on 10 other routes including Milan Bergamo, Dublin, Madrid, Palma, Porto and Verona.

Summer’23 will see the addition of 1 new based aircraft at Birmingham (following the arrival of a 5th based aircraft this week) bringing Ryanair’s total fleet at Birmingham Airport to 6, including 2 brand new environmentally efficient Boeing 737 8-200 “Gamechanger”, which cuts fuel and CO2 emissions by 16%.

This additional aircraft will enable Ryanair to operate this exciting 42-route schedule, becoming the leading airline at Birmingham airport. The rapid post-Covid growth Ryanair has delivered to Birmingham (c. 50% more routes than pre-Covid) has been secured by the Airport’s management team, who recognised a long-term deal with Europe’s biggest and most reliable airline was the only way to drive recovery and growth.

However, if we are to continue to grow and to drive recovery and connectivity to the UK, Prime Minister Sunak must immediately scrap APD in full for all travel (not just domestic travel) and provide incentives for airlines like Ryanair to stimulate growth and recovery for the UK and its regions, such as Birmingham.”

Lodgify raises $30m. in Series B funding to ramp up global growth