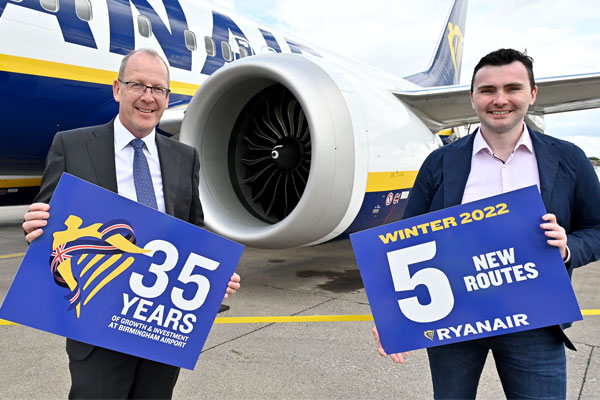 Ryanair’s investment of over $500m at Birmingham will support 150 highly paid aviation jobs and over 1,850 indirect jobs in the local area.

Ryanair announced its biggest ever Birmingham Winter schedule, with an additional based aircraft for Winter’22/23 and 5 new routes to exciting destinations such as Billund, Grenoble, Santander, Stockholm, and Toulouse to recognise 35 years at Birmingham Airport.

Ryanair’s Birmingham based fleet will increase to 5 based aircraft, 2 of which will be new Boeing 737 8-200 “Gamechanger” aircraft which deliver 4% more seats, burn 16% less fuel, and create 40% less noise emissions.

Ryanair’s investment of over $500m at Birmingham will support 150 highly paid aviation jobs and over 1,850 indirect jobs in the local area.

Ryanair are operating a full schedule this Summer across the UK and continues to invest and grow its network into Winter’22, unlike other airlines who cannot operate their promised schedules efficiently and continue to disappoint UK holidaymakers.

Ryanair is leading the post-pandemic recovery across Europe with the help of traffic recovery schemes and lower airport charges. If the UK is to continue its recovery, the government needs to immediately support airlines by scrapping the aviation tax (APD) now in full, a 50% cut on domestic flights from April’23 is simply insufficient.

With 34 routes to choose from this Winter, Birmingham customers and visitors can already book a well-deserved Winter getaway, flying on the lowest fares to exciting new destinations such Billund, Grenoble, Santander, Stockholm, and Toulouse. To celebrate its 35th birthday at Birmingham and an additional based aircraft, Ryanair has launched a seat sale with fares available from just £19.99 which must be booked by Friday, 1st of July for travel from October’22 – March’23, only on the Ryanair.com website.

From Birmingham, Ryanair Director of Route Development, Ray Kelliher said: “Ryanair is delighted to announce further growth and investment at our Birmingham base this Winter, with our 5th based aircraft, 5 exciting new routes and 2 brand new environmentally efficient Boeing 8-200 “Gamechanger” aircraft as we celebrate 35 years of successful operations at Birmingham Airport. Our now biggest ever Birmingham base will deliver 34 routes for Winter’22, including 5 new routes to destinations such as Billund, Grenoble, Santander, Stockholm, and Toulouse.

Lower aviation taxes and competitive airport charges provide the foundation for which Ryanair can deliver long-term traffic growth and increased connectivity. At a time when other airlines across the UK are cancelling flights and reducing their schedules, we’re delighted to make this $100m further investment in Birmingham largely thanks to the hard work and support of the Airport. If the UK Government wants to see more investments from Ryanair and other airlines next Summer, they must scrap the APD tax for all flights, or otherwise put the UK (an island-based economy) at risk of losing air traffic to competing European countries.”

Birmingham Airport Chief Executive, Nick Barton said: “We are thrilled Ryanair is adding to its BHX-based fleet of aircraft as we toast 35 years of its operation here. This long-term move will give customers greater choice and boost economic growth in our region.”