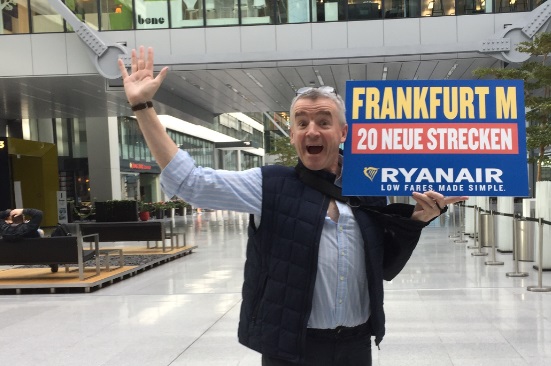 Ryanair’s Frankfurt Main summer 2017 schedule is attracting record bookings, with 4 routes to Alicante, Faro, Malaga and Palma commencing on 28 March on lower fares as Ryanair passes on lower fuel costs, and an even better customer experience, as it continues to roll out its “Always Getting Better” improvements.

In Frankfurt, Ryanair’s Michael O’Leary said: “We are pleased to launch our first Frankfurt Main winter schedule with 20 new routes which will deliver over 2.3m customers p.a. and support 1,750* jobs at Frankfurt Airport.  Our 7 based aircraft represents an investment of $700m, which further underlines our commitment to growing traffic, tourism and jobs in the Hesse region and we look forward to working closely with Fraport to deliver industry leading efficiencies and further growth at Germany’s biggest airport.

We are also pleased to report record bookings on our 4 Frankfurt Main summer 2017 routes to Alicante, Faro, Malaga and Palma and German customers and visitors can look forward to even lower fares so there’s never been a better time to book a low fare flight on Ryanair.  We urge all customers who wish to book their holidays to do so now on the Ryanair.com website or mobile app, where they can avail of the lowest fare air travel to and from Frankfurt.

To celebrate the launch of our Frankfurt winter 2017 schedule we are releasing seats for sale across our European network from just €9.99, which are available for booking until midnight Thursday (2 Mar). Since these amazing low prices will be snapped up quickly, customers should log onto ryanair.com and avoid missing out.”